Here is my entry for June’s Furious Fiction, the Australian Writers’ Centre’s monthly competition. Lockdown is nearly over here in Australia, but things remain unsettled with racial tension adding another dangerous element to the world’s instability.

As I’ve said before, this competition is a fun activity with a terrific prize. You can read about it on their website.

The criteria for June were:

I’ve continued with Frankie’s journey and although I feel it is unlikely this chapter will make much sense as a stand-alone piece, I am now more focused on the challenge of completing his story using the prompts given.

You can read the previous chapter in Frankie’s story here.

Chapter 5: Justice for all.

Justice is a tricky concept.  Frankie knew justice didn’t mean fair. It didn’t mean right. It didn’t even mean protection of the innocent. It was a game invented by the people who owned the ball.  A blood sport rigged to ensure the rich always won, even if they broke their own rules.

Frankie was playing for the wrong team. Judge O’Mallory, on the other hand, was on the winning side. Frankie imagined O’Mallory had been fullback for the First XV at St Swanky’s or wherever his type goes to school.  He probably went to boarding school, packed off at five by his neglectful cold-hearted parents.

As the bailiff dragged him screaming from the courtroom, Frankie decided it was time he learnt to play by their rules.

He needed someone to tell his story.

“Bailiff! Take him down!” The thunderous words were still ringing in Judge O’Mallory’s ears as the door slammed on Frankie. He wasn’t feeling like a winner. He’d sentenced another poor wretch to five years in prison on the whim of a corrupt government. A government that allowed for the tyrannical rule of the black-shirted Fashion Police.

Personal grooming had sunk to all-time lows after COVID. People didn’t even bother wearing pants when they were Zooming! The lack of respect spilt over into other areas of life and before long there was anarchy!

The lack of decency and dignity was deplorable! Someone needed to do something!

The Ultra Conservative Party burst onto the scene after the Pandemic with their promises of a return to the “Old Normal”. Changes in the laws were incremental. Like a lobster in a pot, the heat was turned up so slowly no-one noticed until it was too late. The populous had missed the boat on the democracy front.

Low-slung jeans were the first to go. No more dudes with the crotch of their jeans down around their knees. Who could argue with that? A ban on exposed underwear was quickly followed by the prohibition of activewear anywhere other than the gym. Again a significant portion of the population supported that particular ruling.

The UCP controlled the market by buying out all the boutiques.  Easily done, since most had gone under in the lockdown.

They introduced a regulated monochromatic capsule wardrobe which stipulated less than twenty items, a mandated date for changing from one season’s capsule to the next, and jail time for those who breached the code.

O’Mallory wasn’t the only judge feeling uncomfortable about the fashion laws. The secret rumblings amongst his colleagues were getting bolder.

They needed someone to tell their story.

Frankie’s opinion of O’Mallory was wrong. He didn’t know he had an ally in silk and horsehair

Both men needed the same thing, a fearless storyteller! Someone who was willing to blow the whistle on corruption and intolerance. Did such a person still exist?

What they needed was a bloody good journalist!

Another First Friday rolls around and here is my entry for May’s Furious Fiction, the Australian Writers’ Centre’s monthly competition. Like last month we are still in lock down, although restrictions are beginning to be lifted in most places. Hopefully, not too soon. My heart goes out to the people of America who are now suffering the most.

As I’ve said before this competition is a fun activity with a terrific prize. You can read about it on their website.

The criteria for May were:

This month I was able to achieve my aim of getting Frankie in front of the judge. I also realised in my first chapter of this story our protagonist’s name was Charlie and somewhere along the line I switched it to Frankie. Ah well, from now on our flamboyant dresser is Frankie!

This month’s entry was submitted on Sunday morning about 9 AM although it was essentially finished on Saturday afternoon. 496 words.

‘FIVE YEARS? You’ve GOT to be joking? Because I wore brightly coloured clothes? FASCIST!’ Frankie shouted as the gavel hit the sound block.

‘ORDER!’ Judge O’Mallory shouted back, ‘Bailiff! Take him down!’

‘Five years? I can’t! I’ll die!’ Frankie pleaded with his barrister. ‘Please! Do something, you’ve got to appeal!’

The barrister nonchalantly scratched the itch under the horsehair wig as the door slammed on Frankie and the din of his wails receded.

Do the crime pal, pay the time! Andrea thought. Frankie had been a difficult client. He had flouted the law several times, had already served time and here he was again only a few months after he had been released. He shouldn’t be surprised.

He was a recidivist.

On the other hand, these Fashion Police and the Fashion Laws were getting a little out of hand. She couldn’t help thinking it was just another “-ism” oppressing the poor.

Well, it didn’t really matter what she thought, it was the law!

The bubble surrounding her reverie popped as Andrea caught the eye of her learned colleague across the aisle, winking and nodding his head ever so slightly toward the door. Although her own reaction was equally as imperceptible, the message was received loud and clear, and thirty minutes later Lloyd and Andrea were shouting seductively at each other across the noisy crowd in a bar. Crime Does Pay was a very popular venue for the lost souls of the legal fraternity. There was no colour there, only a sea of grey. The black gowns and white jabots replaced by the sedate and State-sanctioned garb that kept the law off their own backs.

They could let their hair down, but not their guard! No-one was safe from the Fashion Police. No-one.

‘What I don’t understand,’ Lloyd bellowed above the ruckus, ‘is why you take on these cases in the first place, Andrea?’

She had liked the look of Lloyd, but the more she got to know him, the more she realised their values were not aligned, and maybe looks were not enough. But then, it was Friday night, and it beat going home alone.

‘You know I can’t resist the underdog!’ she laughed.

Lloyd pulled her close, ‘Ready to go? I’ve got a real surprise for you tonight!’

Andrea was perched on the window sill of the hotel room, high above the sparkling harbour. She smiled at her reflection, knowing the pink negligee was irresistible. She sipped her Moet and in her best bedroom voice called out,

‘Where’s this surprise you promised me?’

Lloyd emerged from the ensuite, naked. Naked except for a black cape with a silver lining.

It was then that Andrea realised the real benefit of money was not buying expensive things, but rather a way of enabling you to hide your own vices and avoid detection.  Crime did pay –  her!

‘Now, that’s what I call a surprise!’ she cooed. 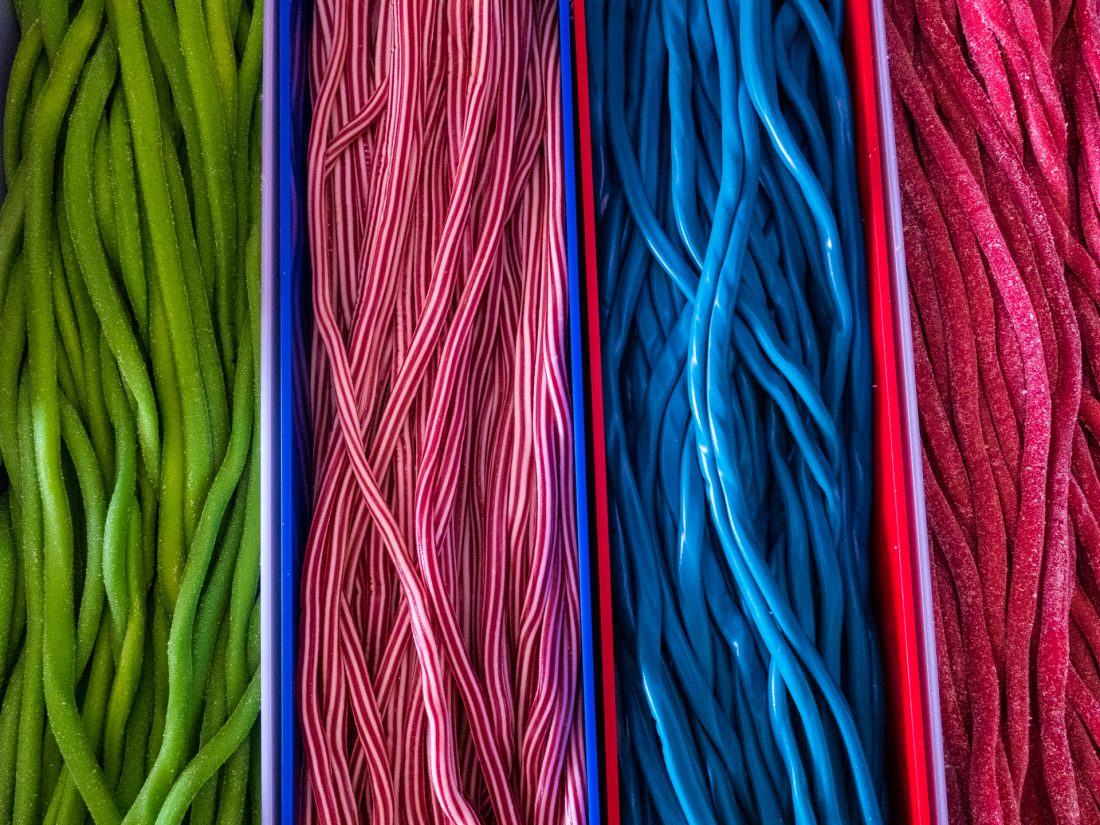 I look forward to the Furious Fiction First Friday each month. I don’t always take the opportunity to write something, but when I do, it certainly is furiously fast! This November, I had a chance to take a peek on Friday night, and I sketched out an idea, but I didn’t actually start writing until Saturday. It’s a fun competition with a terrific prize and you can read about it on their website.

The prompts for November 2019 were a bit tricky! 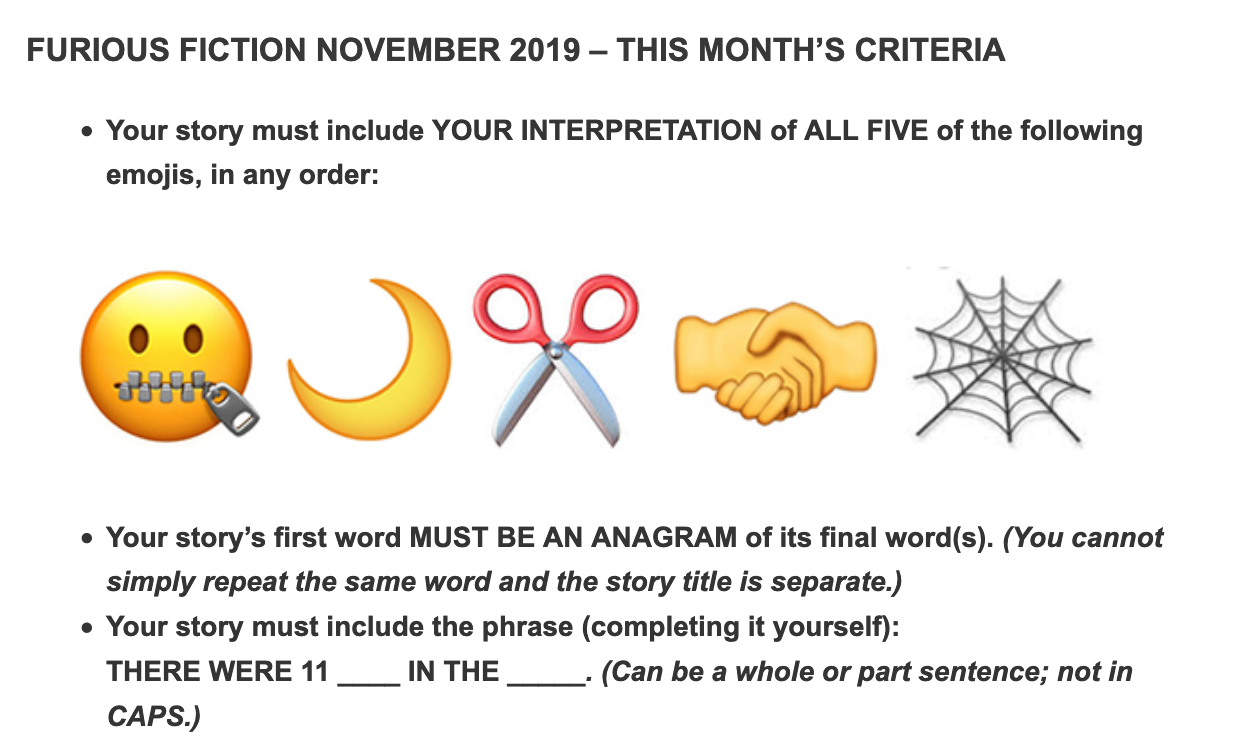 Three in the Bed

“There were eleven in the bed, and the little one said roll o…”

Molly didn’t get a chance to finish the nursery rhyme.

“Cut it out! Eleven? It’s only ten!” Polly interjected vexatiously.

Molly and Polly had been bickering since birth. Molly, the eldest, by seven minutes, thought she could lord it over Polly. While Polly, who had benefited from a greater share of placental oxygen, was the tallest.

With the bickering came the secret schemes. The ones sealed with an even more secretive handshake. The sorts of schemes that only truly identical twins could pull off.

The sort of schemes that twisted and turned and caught the unsuspecting in a tangled web.

It started out innocently enough when one sister couldn’t keep an appointment, the other would go in her place. Polly would sit the Maths papers, Molly would do the art classes. They would lie in bed at night and giggle at the stories they had invented and what the other would need to do to stay in character for the next encounter.

The stakes grew progressively higher as they got older. They shared a Tinder profile. On Saturday nights they’d flick through the photos giggling and calling out in unison.

When they got to Lewis, they both shouted. “RIGHT!”

“How are we going to do that?” Molly asked.

“Easy, invite him back to our place, I’ll be hiding in the bathroom. You go to the toilet, I’ll swap places. Then after a while, I’ll ‘slip into something more comfortable’, and we can swap again.”

Molly wasn’t convinced but provided she’d be the one that ended up in the bed, she’d agree.

“It might get a bit awkward, though, if things start getting hot and steamy and you’re in the bathroom?”

Lewis turned out to be as hunky as his profile picture.

Polly and Lewis quickly got down to business on the couch. He began to trace the  crescent-shaped birthmark on her thigh with his finger, but Polly held his hand and excused herself nervously so she could “freshen up.”

“ SHIT! He saw it! The birthmark!” Polly wheezed as she shut the door.

“We didn’t think about that!”

Polly suddenly looked like the proverbial cat with the pigeon. “Sorry sis, you’ll have to miss out this time.”

“No, that’s not fair! Just turn out the lights!

“He doesn’t seem like an ‘in the dark’ sort of guy to me.” She pushed past, shutting the door firmly on her stammering sister.

Lewis was lying naked in the bed. Polly slipped between the sheets. Lewis looked over his shoulder as Molly slipped under the covers too, singing.

“There were two in the bed, and the little one said …make room for three!”

PS: I am not sure if the nursery rhyme I cite here is universally known. It was one my mum used to sing to me and me to my daughter. It’s a counting song and you use your fingers as you sing along.

There was 10 in the bed and the little one said

There was 9 in the bed and the little one said