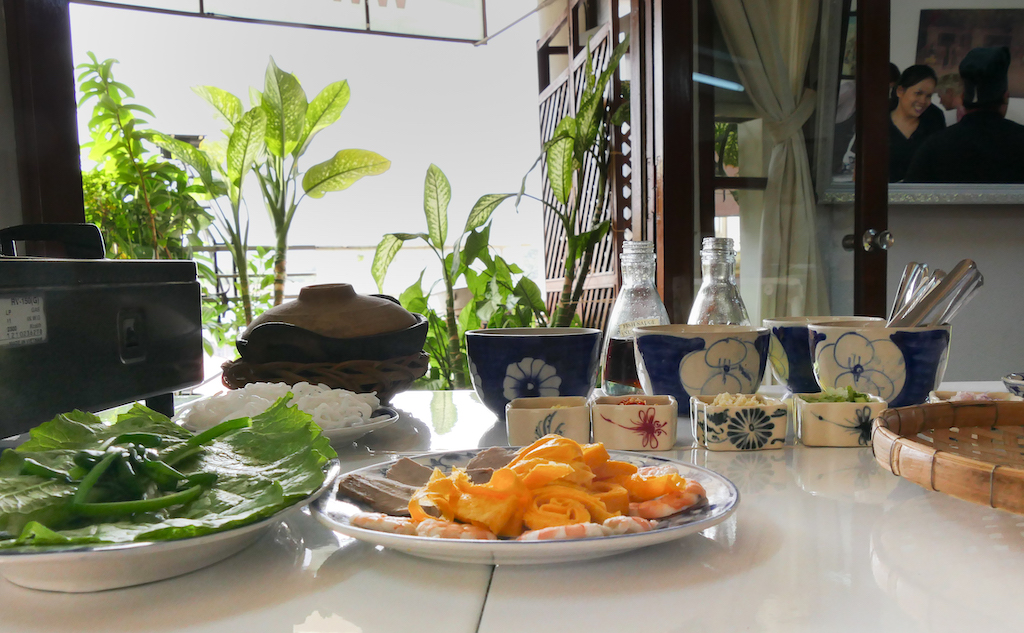 A few years ago I went to Vietnam on my way home from Israel. Not exactly a direct route… but since I was transiting through South Korea it was not too much out of my way.  The main focus of the trip was to join a small group tour with Intrepid Travel from Hanoi in the north down to Ho Chi Min City. I stayed on in Ho Chi Min City for a couple of days to catch up with some friends who were living there at the time.  Vietnamese food is a favourite of mine so I was keen to try a cookery school.

Australia has a relatively large population of Vietnamese people who came here as refugees in the 1970’s and 80, when Australia had a more humane and sensible policy towards refugees than it does now … but that’s a different story.  As a result, it’s not hard to find a good, authentic Vietnamese restaurant.  Their cuisine has become almost mainstream with school canteens offering rice paper rolls as a matter of course. I have always found it tasty, light and satisfying.

I booked an afternoon class with The Vietnam Cookery Center after reading reviews on Trip Advisor. The Cookery School is still open and gets consistently good ratings.

The School was on the fourth floor at 26 Ly Tu Trong St and easy to find. I was able to walk there from my hotel without a problem although it didn’t look like a cookery school at first!

The three hour lesson was around $US40. There were two other women who were from Sweden doing the course with me. Their husbands joined them to eat what they had cooked after the class.

We were welcomed by a young woman who spoke good English (and whose name I don’t remember sorry)  who explained what we would be doing before we were introduced to the rather stern looking Chef  – Bai Van Bao.  I don’t think he spoke the entire time and he only smiled once… right at the end.  I got the impression this was part of the performance. Very much like the Iron Chef if you have seen that Japanese Cooking show.

The Chef would demonstrate first and then we would copy. The ingredients were all laid out, pre-measured and chopped.

All the dishes were made from scratch, except the pho (a beef  and noodle soup, pronounced “fur”). The stock and meat requires about 5 hours cooking time so this would not have been possible to make in the time frame we had. The stock was bubbling away when we got there and the Chef showed us how to add the spice mix at the end and assemble to soup.

The ingredients were very fresh, the recipes uncomplicated and the resultant dishes very tasty. As participants, we made  green spring rolls with a dipping sauce; sauteed chicken with spicy sauce and sweet basil and steamed rice with pandan leaves. The pho and a fruit dessert had been made for us. We walked away with a full belly, a recipe book and a nice apron. In my mind a great way to spend the afternoon.

These photos were taken 2 cameras ago using JPG rather than RAW which I use to shoot now. Looking at them I can see my photography has come a long way!