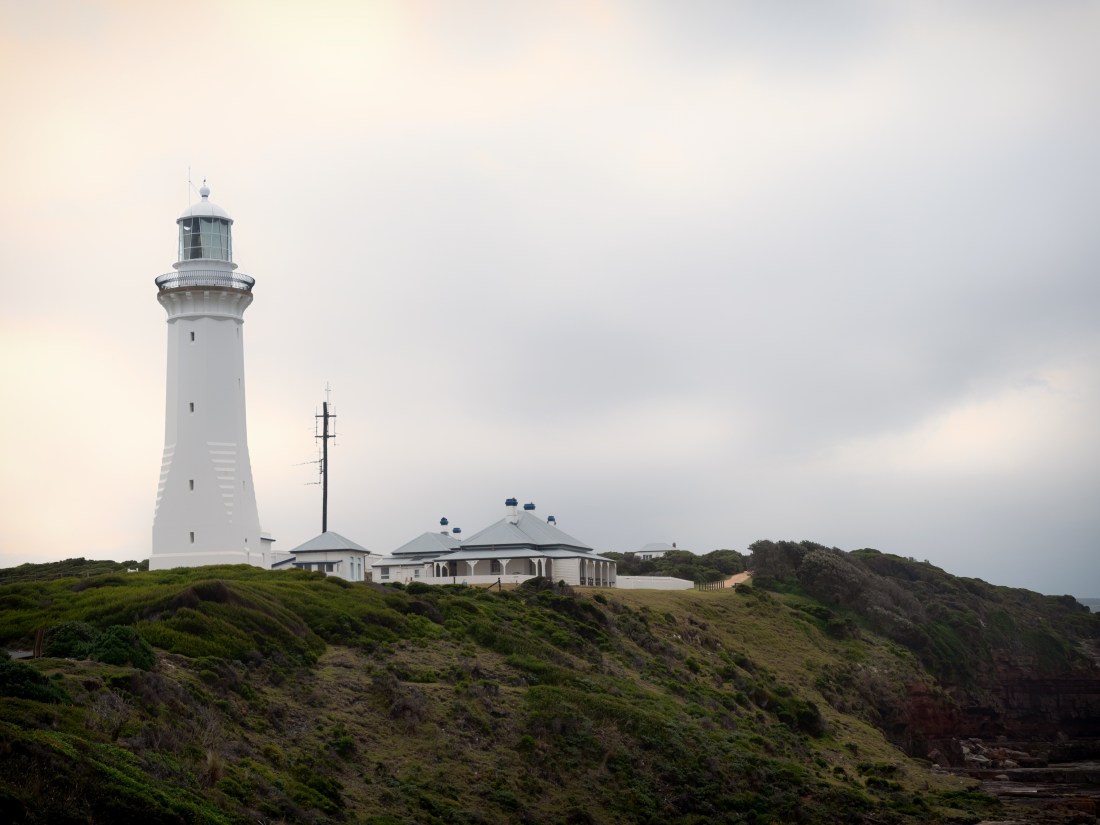 Lighthouses! I like ‘em and it would seem that many others do too. I will blame my fondness  on epi-genetics. Somewhere in my relatively recent history one of my ancestors was involved in building lighthouses in Australia. In particular the Macquarie Lighthouse in Sydney’s Watson’s Bay. I have written about lighthouses in my home town of Wollongong, Scotland and Maine, USA in previous posts.

In this post I am not planning on going into any detail about the lighthouses themselves but rather quick anecdotes about my visits and some photos. There are plenty of other websites which have lots of information and maps. Check out Lighthouses of Australia  and Wikipedia.

My bucket list includes a very ambitious and totally impractical goal of photographing every lighthouse in Australia. No mean feat given there are around 350 of them and over 25,000 km of coastline! My more realistic 60 before 60 list (60 things to do before I turn 60) has an item “to see at least 15 new lighthouses” as one of the things to tick off before May 2021.  I am pleased to say that this item is in fact done and dusted after checking out ten new lighthouses on my recent Great Southern Road Trip to add to the five others I had already recorded. Unfortunately, due to a COVID lockdown in Victoria I missed several that I had planned to see including staying overnight at the Wilson’s Promontory Lightstation.

This small, sad lighthouse is no longer in service and has been damaged by graffiti and vandalism. It is at the end of a short but pleasant stroll from the car park.

There is an amazing story about this sandstone lighthouse and reading the information boards is enough to make the visit special. The location for the light was very contentious. The people with the money advocating for one location and the people with the maritime expertise declaring it should be in another. Money won. Ships became confused and wrecks continued. The lighthouse is very near Wreck Bay, so called because of the number of wrecks that occurred there.. The Lighthouse is in the Booderee National Park which is strictly not in NSW but rather part of the Australian Capital Territory. It is managed by the local indigenous people and you need a valid visitor pass to enter. You can get this easily from the website. You also can catch a glimpse of the lighthouse at Point Perpendicular in the distance.

Boyd’s Tower was never actually used as a  lighthouse and served as a whale watching station. There is an excellent 33 km walk from the tower to Green Cape Lighthouse. There are several camping spots along the way. I did the two ends of the walk but not the middle section. You can read my Light the Light Walk post for more information. The tower is in Green Cape National Park and you need a valid pass.

Green Cape is  managed by the NSW National Parks and Wildlife Service. You are able to stay at the lighthouse in the various cottages. I stayed overnight in the assistant keeper’s cottage. It is big enough to accommodate 6 people very comfortably and I was rattling around on my own in such a large space! I had actually booked the much smaller Telegraph Station but due to a maintenance issue, I was upgraded! The grounds are home to some enormous wombats and tiny pademelons.

There is an onsite manager who keeps a very low profile. If you book ahead you can organise a tour of the lighthouse itself. The lighthouse is in the southern portion of Green Cape National Park and once again you must have a valid pass. It is also at the end of a long dirt road. I was fine in my AWD Subaru but it looked a bit hairy for those in two wheel drives.

Killer bees and asbestos! If you don’t mind a bit of dirt driving this lighthouse is well worth a visit. It is situated a little north of the small township of Arthur River on Tasmania’s wild west coast. I had a fabulous time photographing wild seas and craggy rocks.

Rocky Cape Lighthouse is also at the end of a dirt road. The closest town is Stanley on Tasmania’s northern coast. Apart from the lighthouse there are several very good hikes in the area. I began the walk to Sisters Beach but abandoned the idea because the very strong wind nearly blew me off the steep, narrow track.

I went to Table Cape Lighthouse in the wrong season! This lighthouse is surrounded by tulip farms and if you went in spring you would be able to see the mass plantings of tulips and the lighthouse. Have a look at this video from Discover Tasmania to get a hint at what you can see at the right time of year. Having said that the road is narrow and winding. The traffic must be horrendous with budding Instagrammers!

If you don’t visit any other lighthouses in Tasmania or you’re not really a lighthouse enthusiast, make sure you do visit this one! In addition to the pretty little lighthouse with red stripes, there is a Pilot Station nearby which has a small maritime museum. The museum has an interesting collection and is run by volunteers. If that still is not your cup of tea, have a real cup of tea at the lovely little cafe! If it’s still on the menu don’t miss out on the Eton Mess! (I had it for lunch! Kicking the nutrition goals!) Once again there is accommodation at the lighthouse and at the pilot station.

Seen from a distance!

I did not actually visit the next three lighthouses and only got glimpses from a distance.

Mersey Bluff is in Devonport.  You have to access it via a caravan park. It was my intention to try and catch it at sunrise but the boom gates, lack of signage and the dark, made me give up. I did not get to see it until the Spirit of Tasmania sailed past it as I was leaving Tasmania. This lighthouse has vertical red stripes, in contrast to the horizontal bands at nearby Low Head. Apparently a way for sailors to tell the difference in times of old….

This lighthouse is on one of the small islands near Flinders Island. The closest I could get was through the telescopic lens of my camera from the top of Mt Strzelecki. Even then it is just a tiny speck!

This lighthouse is at the mouth of the Macqaurie Harbour near Strahan. I snapped this picture as I was cruising past on a Gordon River Cruise. As you can see the weather was not great!

If you are going to be doing any road tripping in Australia it is very worthwhile to invest in park passes. I bought an annual pass for Tasmania online even though I was only going to be there for a few weeks. The annual pass was MUCH cheaper and more flexible than buying individual day passes for each park. Incidentally, even if you are just hiking and not driving, you need a visitor pass which you are meant to carry with you. I already had an annual pass for NSW National Parks.