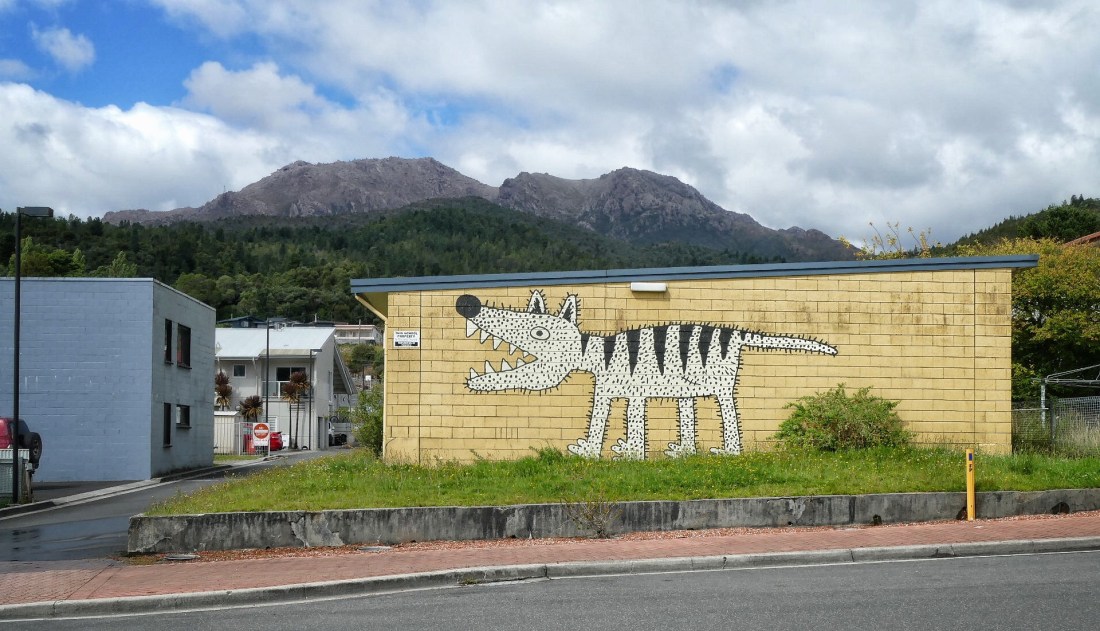 It may be hard to believe but there is a very strong connection between a railway in the remote North West of Tasmania and a late 19th-century Swiss engineer. The West Coast Wilderness Railway runs between Strahan and Queenstown. Originally built to transport copper from the Lyell and Co mine to the coast, it fell into disrepair after being abandoned in the 1950s. The decline began in the 30s when the road from Hobart reached Queenstown and went through to Strahan. It was faster and cheaper to transport the ore via road.  The railway is now fully restored with tourist services running nearly every day from either the Strahan end or the Queenstown station.

The railway was cut through virgin old-growth forest. The landscape is very hilly, the rocks are very hard. Tunnelling was not really an option and the designers were charged with finding a way to go over the mountain rather than through it. They settled on a new rack and pinion system designed by Swiss engineer Roman Abt. The rack and pinion system used a third central rail which has small vertical teeth that engage with cogwheels on the undercarriage of the train. This means that the train is able to manage much steeper hills, albeit slowly, as the teeth and cogs mesh together to prevent slipping on the way up and on the way down.

I booked a seat on the half day Queenstown Rack and Gorge Tour from the small tourist kiosk on board the Spirit of Tasmania. There was only one ticket left for the time period I would be in the area, so I grabbed it.  At the time, I did not realise I had bought one for the premium ‘Wilderness’ carriage for $185. Continuing COVID restrictions means that the train must carry fewer passengers. There are several tour options which are either full or half days.

The carriages and Queenstown Station have been faithfully restored to a very high standard and they are truly beautiful. The staff make it an outstanding tourist experience. As stated I had booked the premium Wilderness carriage by necessity. This included a welcome glass of champagne, hors d’oeuvres, a Devonshire Tea, Lunch, Valhalla icecream and several cups of tea all being provided in the time span from 9 AM till 12 PM! Other passengers in the ‘standard’ carriage had to pay separately for these provisions. 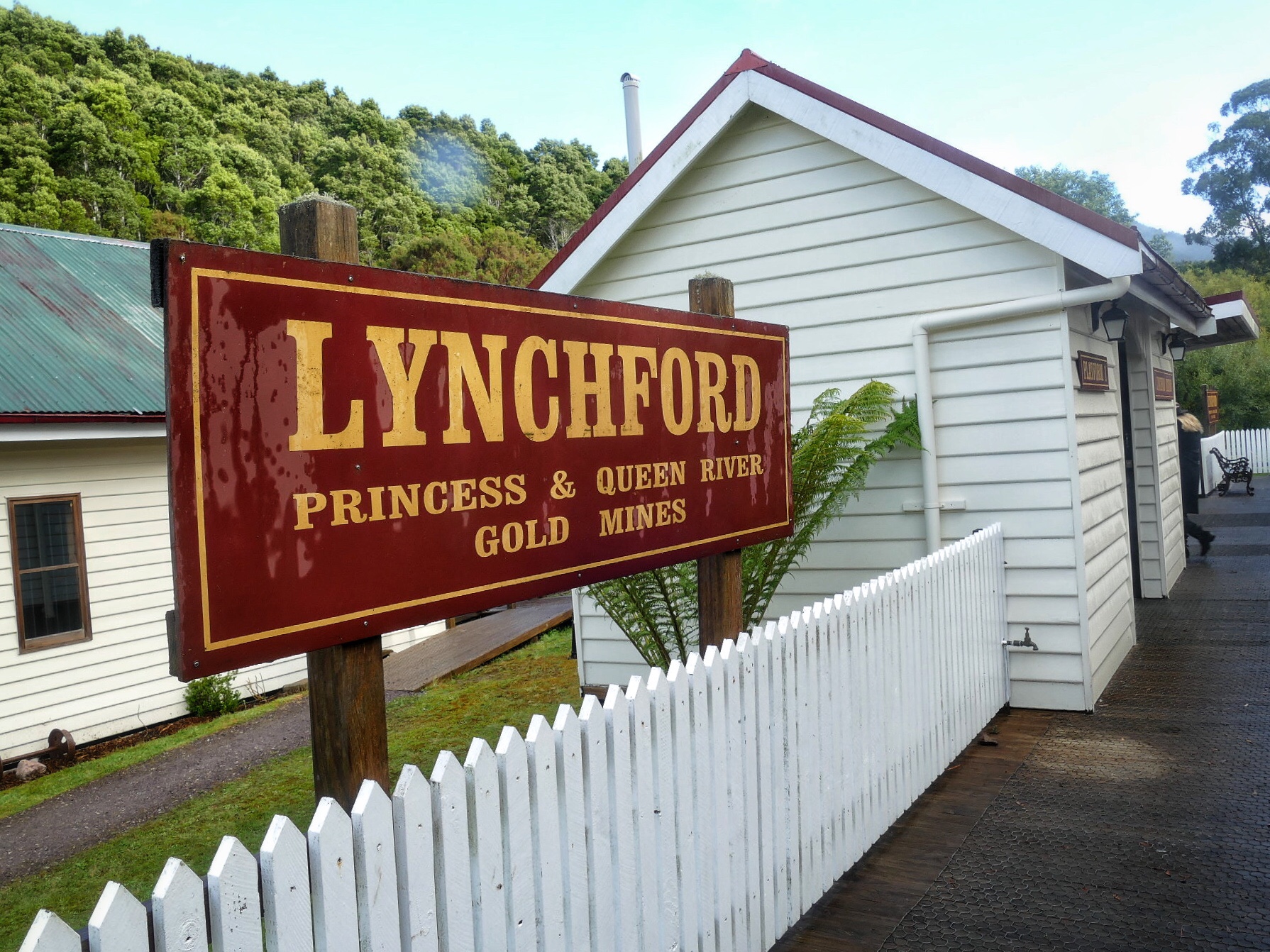 Lynch was the first to find gold in the area

The route passes through lush rainforest and at some points there are glimpses of the Kings Canyon. The track is very narrow and there is very little space between the train and the rock cuttings.

The train stopped at several stations along the 16 km route and there was an informative commentary as we went outlining the history of the railway and the people involved in its construction. It would have been a tough life.

One of the highlights of the tour was watching the engine being turned around for the return trip. I’m not a train-o-phile but like train journeys and this was a good’n!

There are no toilets on the train but there are on the platforms and most stops are for 20 – 25 minutes as the engine refills its boiler.  Bear in mind that there are at least 100 people on the train and only a few cubicles! 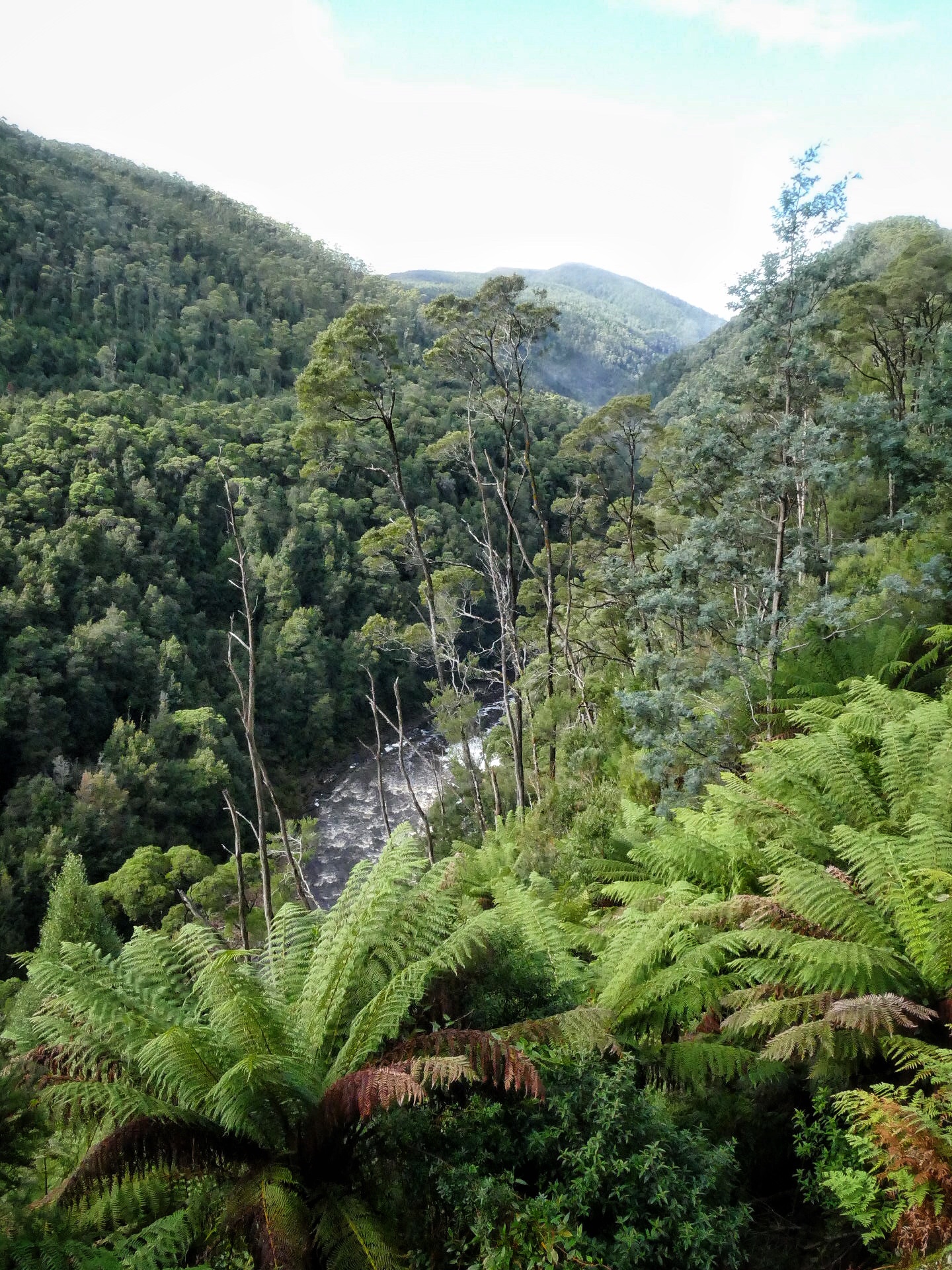 At the conclusion of the tour, I stayed in Queenstown for the afternoon. Queenstown has the familiar trajectory of a mining town. It’s past its heyday and there are lots of old grand buildings that grace the streets. Many shops are boarded up and real estate is very cheap. I spent about an hour at the Gallery Museum and then did a walk around town. I was pleased to see that there is a fair bit of street art around and some quirky little houses.  I was hoping to find opportunities for some street portraits but the only people in town seemed to be the tourists off the train. Good for the town, bad for a photographer looking for interesting subjects!

The Iron Blow Lookout a few kilometres out of town, is definitely worth the effort and if you’d like a little walk after eating all morning, have a look at the Horsetail Falls Walk. This is one of the 60 Great Short Walks of Tasmania. If you are not keen on walking on exposed ledges this may not be for you. It’s only short, less than 2 km return, but the boardwalk is more or less bolted on to the side of the cliff.

The railway tour ended up being a really good option on the day, as the weather was dodgy and not suitable for long walks. If it sounds like it’s your kind of tour book early, especially if you are travelling in a group. I jagged the seat because I was travelling solo and there happened to be an odd number of people in another group.

It’s certainly worth doing but may not be in the budget for all. If you’re a train enthusiast, it would already be on your “must do in Tasmania list. 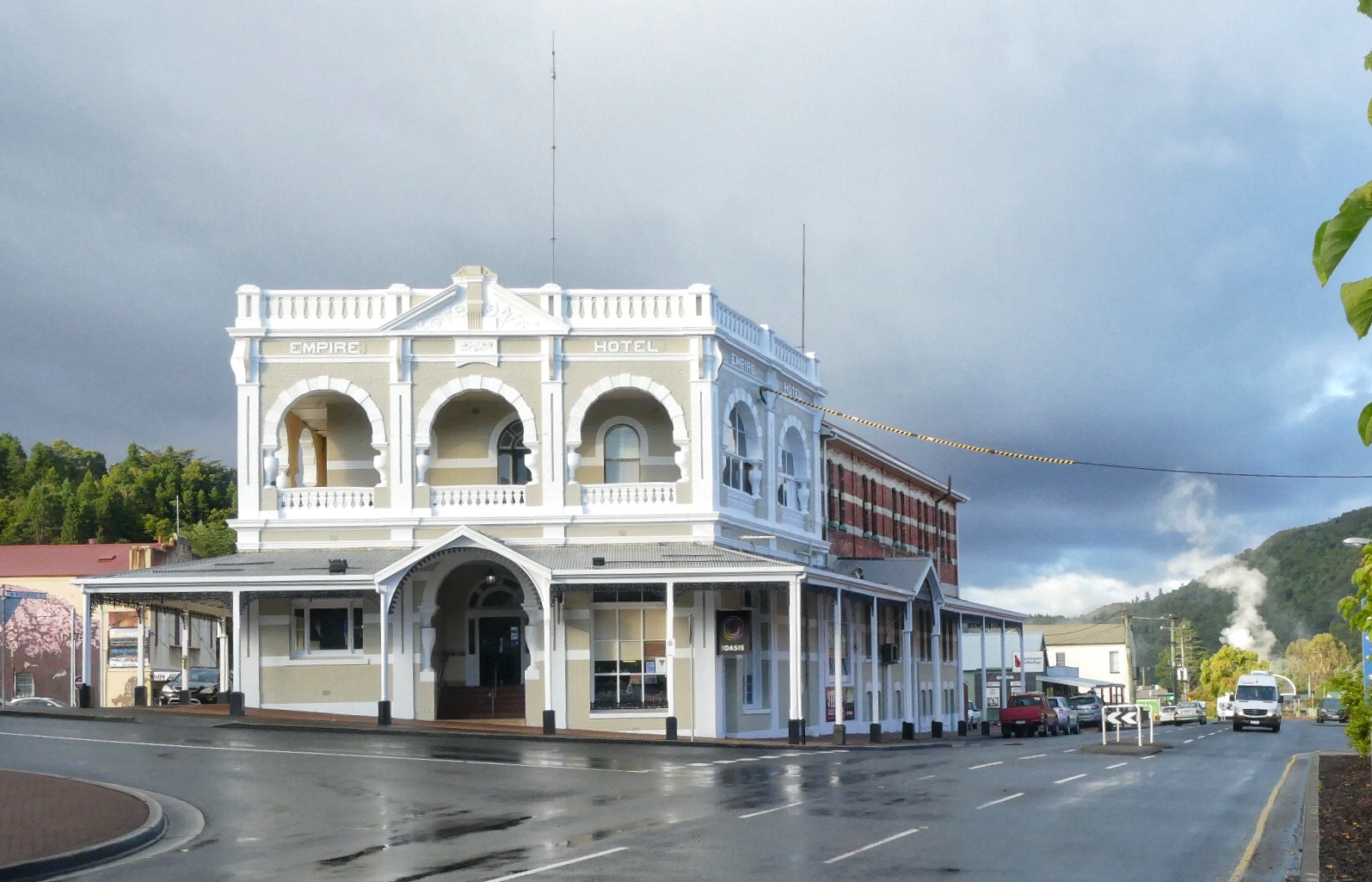 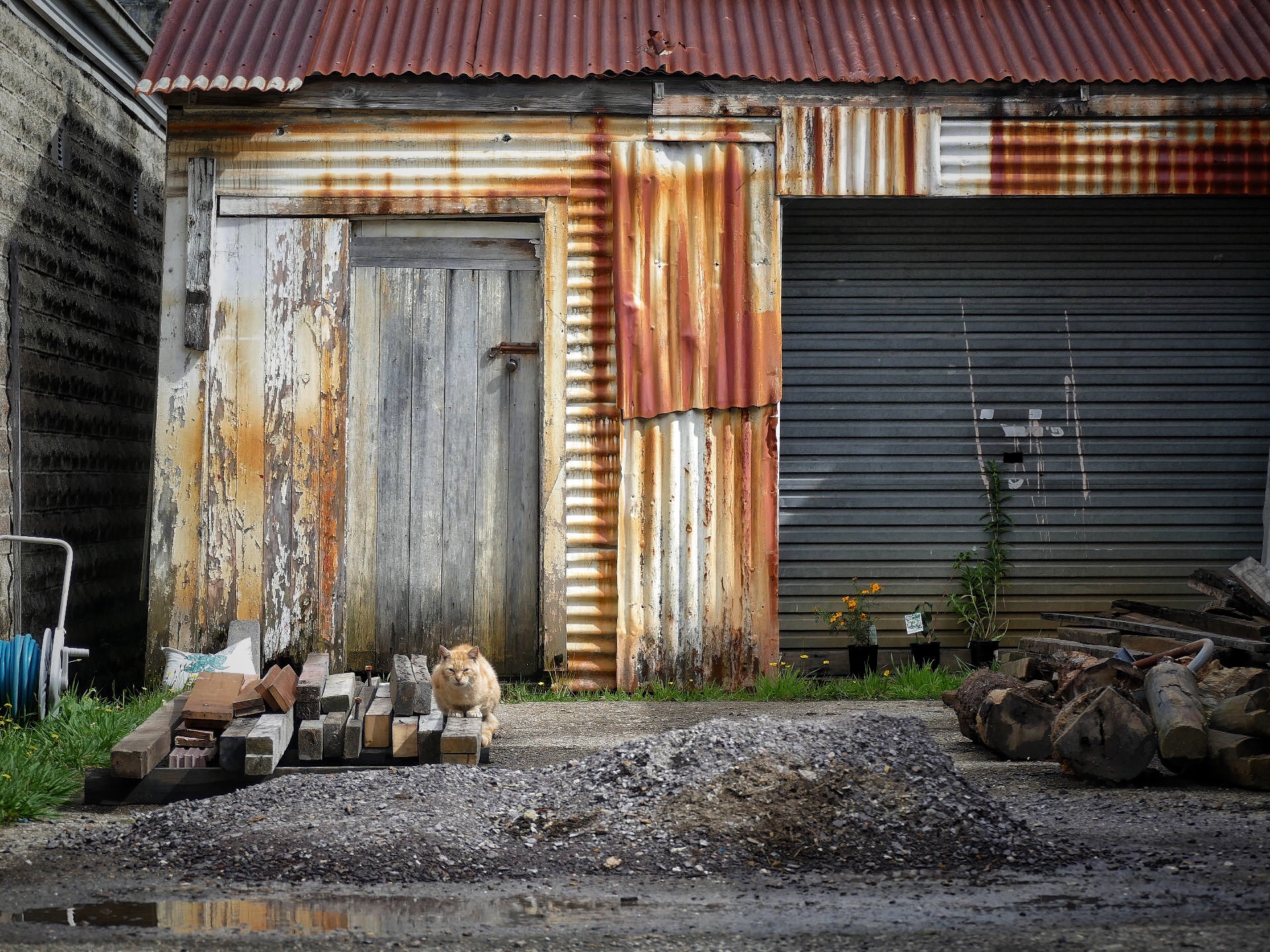 PS: An interesting fact. There are no regular commuter/passenger train services in Tasmania. Even though there are lots of train tracks, they are for freight only. It’s a pity because many of the lines are through stunning wilderness areas and right on the coast. Maybe one day with the resurgence of rail tours in post COVID times more tourist lines will be developed and opened.