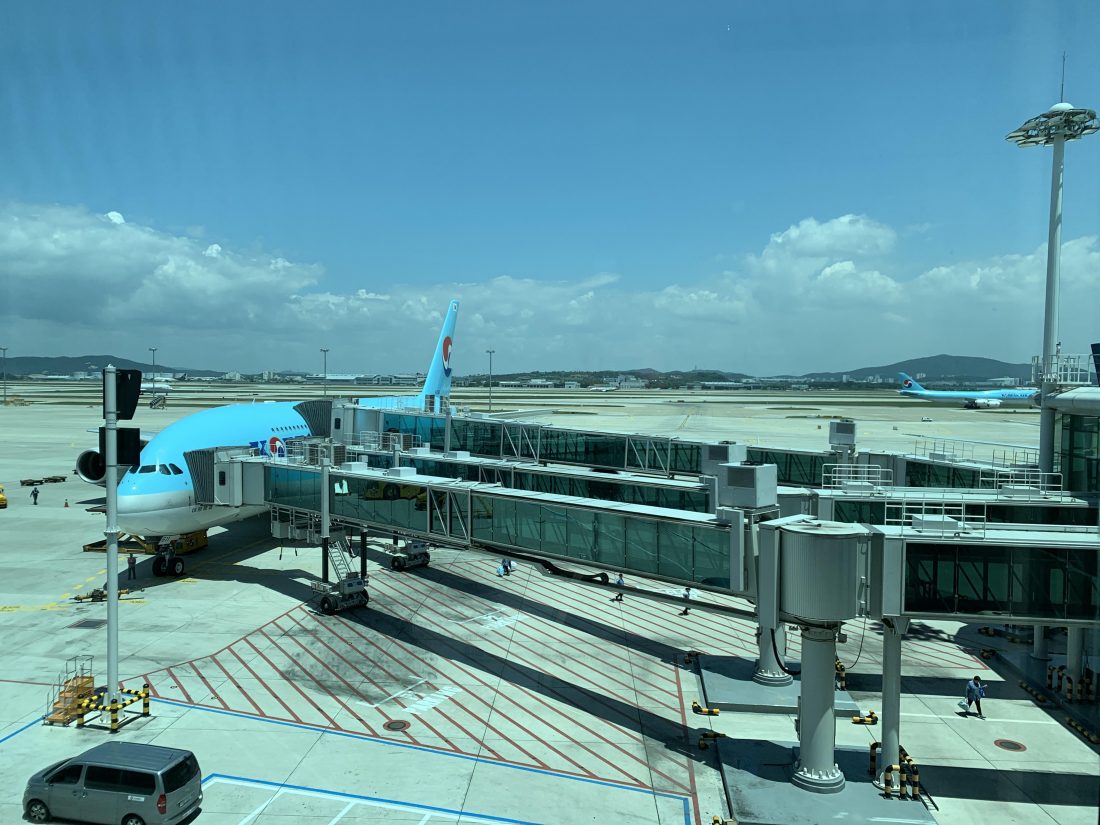 I began this post while I was sitting at Heathrow Airport, waiting to fly back to Australia. I have been home for a few days now, but have only just managed to get time to put something together for Friday’s deadline. I am planning on publishing some more considered posts about my vacation in Scotland over the next few weeks. I had a fabulous time and have so much to share!

The joys(?) of long haul flights

The prospect of being awake and upright for the two days is not a happy one. My Scottish vacation has come to an end, and today is the day to head back to Australia. The journey starts waiting for the (delayed) LNER (London and NorthEast Rail) 10:00 AM Edinburgh-London Express.

Five hours later I transferred on foot to the Piccadilly Line for the 55 minute trip to Terminal 4. The carriage is airless and hot, with only an occasional breeze fluttering my hair when the doors open. The number of passengers dwindles as we get closer to the airport and I can feel less guilty about my big suitcase blocking the aisle and my backpack taking up a seat.

I had completed a web check-in, but the fellow at the KAL counter (quite rightly) decided that my backpack was too big and bulky to be considered cabin luggage so I need to check it in. On top of that, my rolling suitcase is overweight. I joined the clusters of people scrambling on the floor to publically reorganise my luggage, switching 3 kg from one bag to the other. To be fair, I knew the backpack was too big, and I had planned to try and bluff it. When I left Sydney, I had all the compartments zipped up and strapped down, but with all the bits and pieces I had bought, it was now fully expanded!

Wheeling the luggage-laden trolley into the accessible toilet cubicle, I get changed into warmer clothes and heavier boots. I am desperate to wash my feet after wearing sneakers on the unexpectedly hot Tube ride. I baulk at the notices over the bathroom basins indicating there is a foot wash in the multifaith prayer room next to Gate 9. Many others besides me must have considered washing their feet in these sinks.  I decided to give it a miss. It would have to wait until I had a shower in Seoul. The halfway home point. Until then, I’d have to keep my shoes and socks on!

A second turn at checking-in is successful, and with both the big bags off my hands, I can head to security.

With the frantic flurry of repacking, check-in and security clearance over, I have settled in for the wait, and I’m quietly enjoying a very large glass of Pinot Grigio. I fiddle with my phone and add up the time ahead of me. Another ninety minutes till I can board, twelve hours from London to Seoul, another 11 to Sydney after a four-hour layover in between. Sigh! At least I can have that shower in the Prestige Lounge at Incheon Airport courtesy of my FF points! Perhaps, if there are any vacant lounges in the “relaxation room”, even a blissful lie-down

Next time I travel long haul I am going to consider booking Prestige seriously. Really seriously! Even if only for the final leg home. That last 10 hours; when you are so weary, you will commit a crime for a lie down – that bit. 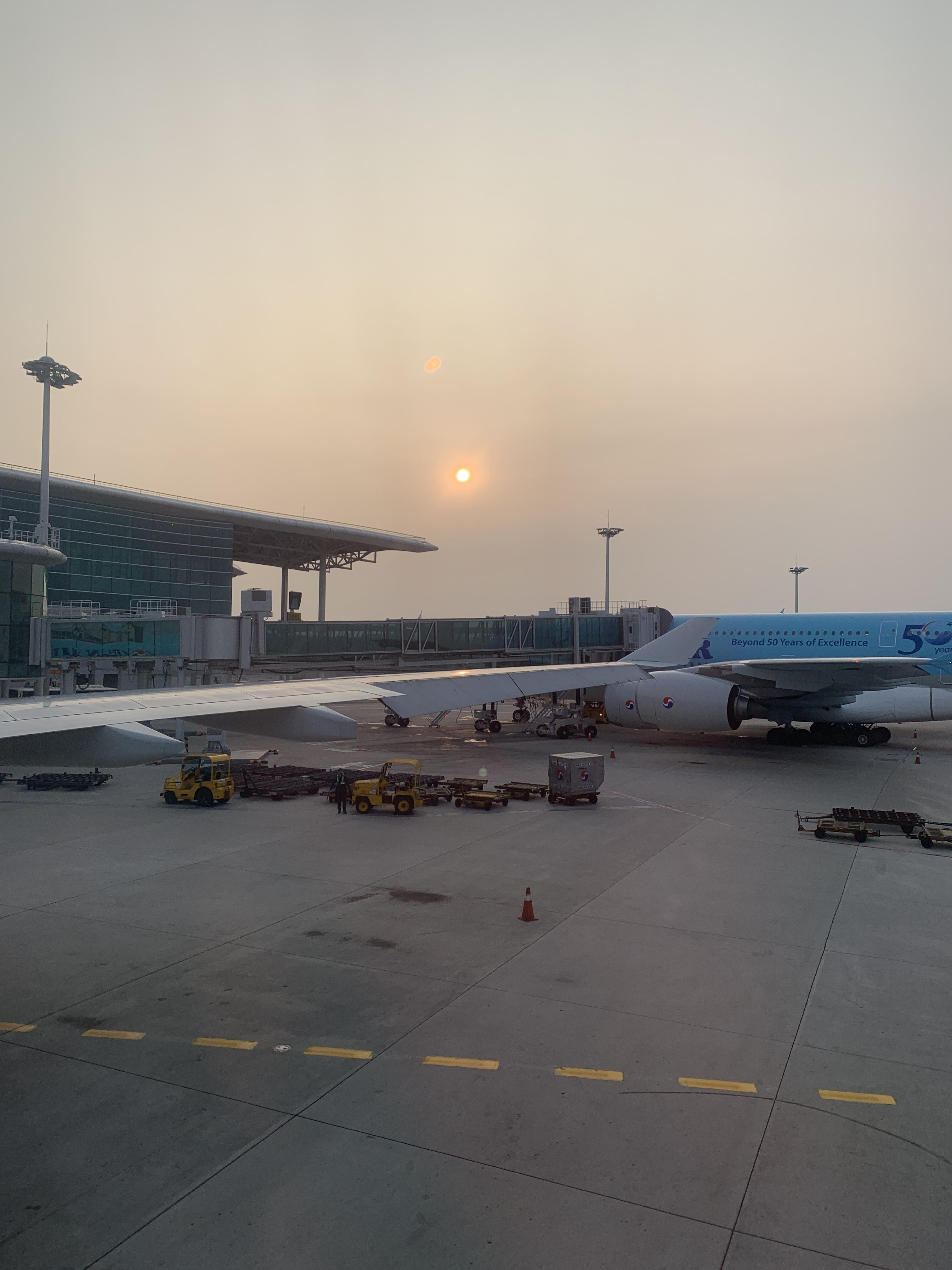 I am now one flight down and boarding a smaller plane. The Korean crew welcome me most warmly, and I make my way to my seat. After “the chicken” or “the beef” decision, the lights are dimmed, and people drop off to sleep while I curse the fact that during my frantic luggage re-sort, I left my antihistamines in the other bag and can not rely on them to make me drowsy. A few hours later, I give up trying to sleep and watch five more episodes of the police drama I downloaded to my iPad.

The map on the back of the chair shows a familiar outline of the SE coast of Northern Queensland, and while breakfast is served, we head over the Great Barrier Reef. I’m over Australia, but it’s still 2 hours 55 minutes till we land. Soon the lights of Sydney are blinking in the sunrise, and I’ve got 10 minutes to watch in the final episode! Can’t you go around one more time? Give me ten more minutes till I get to the ‘who-dun-it”? The flight attendant insists I pack it away.

Another queue to pass through immigration and quarantine. I join the “something to declare” line since I ‘ve been hiking in agricultural areas, but I’m waved through after an explanation of where I’ve been. Yet another wait for the Airport Shuttle and a 90 minute drive to my front door. Thursday has vanished somewhere, lost in changing time zones.

I finally open my front door and sigh with relief that all is as I left it. It’s been 47 hours since I left the Airbnb. My goal now is to stay awake until it’s dark to help combat jet lag.

That’s another seven hours away.

Fill up the kettle, start making the coffee and wish me luck, it’s gonna be at least a 6-cup day!