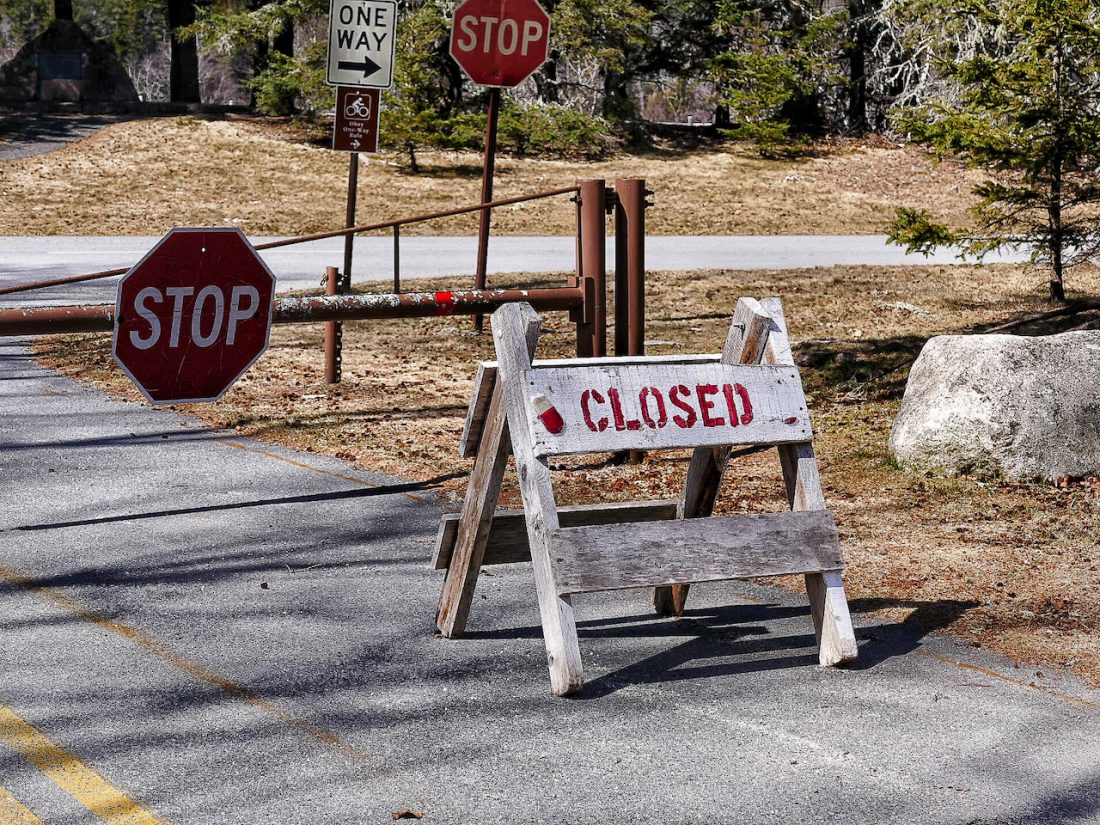 On the Maine Road

In April this year, I took a trip to the USA. I took two completely different routes: the Fast Lane and the Maine Road.  Three weeks in New York, a city that’s always open and humming, book-ended a five day road trip to Maine, which I discovered, was mostly “closed-for-the-season”.

My plan for Maine was to take in few hikes in Acadia National Park,  do some serious lighthouse spotting and sample authentic lobster rolls in their natural setting. I knew it would be a bit chilly but that didn’t matter after all, spring had sprung!

It should have twigged as I was tried to book accommodation. Most of the AirBnB listings said they were unavailable for the dates I was trying to book. I naively thought they must be just be very busy. I kept scrolling until I found someone taking bookings.  I ignored the small print; “We re-open on April 14th”  I would be there from April 7 – April 11th. A few days shouldn’t make that much difference? Should it?

Being from the mild subtropics, I didn’t understand how comprehensively closed everything in Maine would be. The larger cities of Portsmouth and Portland were business as usual, but the small beach-side towns in between, were in fact, “closed” except for the local grocers and a few cafes. In the end, this only added to the appeal of an impossibly “Pinterest” worthy coastline which I enjoyed without crowds. My loves for quiet hiking, quaint architecture and lighthouses were well served.  The iconic lobster roll, on the other hand, was well and truly off the menu as a summer only delicacy.

Picking up the rental car from Laguardia Airport on a Saturday morning was a good idea. I missed the weekday traffic heading out of the city and I got a better deal compared to getting it in Manhattan. I caught the M60 bus  bus from Harlem and then the free shuttle bus from the airport concourse to the rental car office.

Once on the road, it was a compromise between the scenic coastal route and getting to Kittery before dark.  I headed east through Connecticut and Rhode Island, turned North on the I395 at New London up to Worcester, Massachusetts, then through New Hampshire and finally Kittery, Maine.

Six states in less than a day! Trying doing that in Australia!

My first attempt to photograph a lighthouse was foiled by a gated estate! I could see the Old Saybrook Breakwater Lighthouse on the headland, but couldn’t figure out how to get to it as it was surrounded by private homes and a large golf course with big warning signs!

The tiny town of Kittery, on the New Hampshire-Maine border is the oldest town in Maine. Already around 5 pm by the time I arrived, I just managed to snag photos of the sun setting behind a bridge that looked just like the Sydney Harbour Bridge (the Piscataqua River Bridge).  My accommodation for the night, a  stylish AirBnB was right on the banks of the Piscataqua River.  I chose to stay on the Kittery side because it was considerably cheaper than the Portsmouth side. An easy stroll across the Memorial Bridge took me into the commercial heart of Portsmouth within a few minutes so no harm done by saving money. I wandered around the quiet streets, looking for food and settled on Fat Belly’s Bar and Grill because it looked friendly and cosy. Turns out they make a mean veggie burger and serve nice cold wheat beer!

The next morning I headed out for the Whaleback Lighthouse on Kittery Point and  discovered it must be the chicken’s day off!

My first attempt at a lobster roll was at Lobster Cove, York.

“No, honey” the waitress said, “NOT at this time of year!” Eyes rolling as if I should have known better. No lobster in Lobster Cove?

Empty car parks with massive capacity and tourist shops with boarded windows made it obvious that this town was used to big crowds. I was one of the few who braved the weak spring sunshine and the stiff wind that held squawking gulls in one spot, despite their flapping wings.

Meh…I am not much into shopping and the scenery was still open, so I was happy!

As I headed further north the piles of deep snow became more frequent and I kept my jacket-gloves-scarf-hat combo at the ready.

Old Orchard Beach reminded me of an aging, overblown gigolo with its fairground, ferris wheel and tall-legged wooden pier. The temperature reminded me of Antarctica!

Once again – no lobster roll.

I made good with half a sandwich and soup. I’d been in America long enough to know a ½ sandwich would be enough!

I picked up groceries for my two night stay on Mt Desert Island and settled in for a frosty night in a old colonial cabin right on the edge of the Acadia National Park.

Another early start had  me crunching along the snow covered carriageway, past logs dripping in icicles and the rustling of turkeys hidden somewhere in the scrub. Acadia National Park had been described to me as one of the most beautiful parks in America but it was here that my (wilful) ignorance of the seasonal closures proved to be  the most inconvenient.

The Park has a loop road, the majority of  which was closed. I was restricted to a few limited sections. This did not deter me from a long walk around Eagle Lake after jumping a low fence. I had a lingering guilt  that I had not paid the entrance fee suspecting I should have, to someone,  somewhere, even though the booths were closed. I half expected to find my wheels clamped when I got back to the car.

It was sunny and  -6ºC. I was well dressed with thermals, fleecy hiking pants, a merino wool jumper, goose down jacket, woolly socks, two pairs of gloves, scarf, balaclava and beanie.

This Aussie knew there was no such thing as bad weather, only bad clothes! I picked my way through the snow like the Michelin Man,  feeling a tad overdressed when some locals walked past in three less layers than me. After three hours walking around Eagle Lake, I headed into the town of Bar Harbor for lunch. This time I was determined to find the now elusive lobster roll. Haven’t they heard of a freezer up here? Five cafes and another hour later, I settled for – you guessed it – soup and ½ a sandwich.

Today was the day for “THE lighthouse”. The Bass Point Light which perches on craggy, often snow covered rocks with frozen waterfalls bedecking the plinth on which it sits. On attempt No 1 I found the carpark alright, but couldn’t find a path down to the rocks below. I figured that you could only reach it by boat. The boat tours, were of course, “closed for the season”. Never mind, I thought,  next time I’m in Maine! I headed off to a nearby town for a warming coffee at Sips Cafe. I told the cafe owner about my predicament and she kindly explained where the path was:

“From the car park, look to your left.  Find the dirt path hidden behind the toilets and follow it down as far as you can go.”

At attempt No 2, THE lighthouse mission was accomplished. Tick!  Another photography subject off the bucket list!

Next, another hike took me around Wonderland followed by the Jordan Pond Shore Trail (Acadia NP) before hightailing it back to Portland for the sunset. Low clouds and a pink sky gave a perfect backdrop for the Portland Head Light at Cape Elizabeth

My night’s lodging, an AirBnB in Preble Street, was a large, rambling early 20thC  Eastlake and Stick style home, with six bedrooms, several bathrooms,  a pool room, a music room, a huge kitchen and at least three cats. The owner had texted me from Mexico, with the code to open the door and insisted I make myself at home. So I did; by having  a good (but respectful) poke around looking at all the art and artifacts which covered nearly every surface. After a busy day walking and driving I was happy to snuggle up and read a book I had found on the shelf  eating Italian take away with one of the super friendly cats on my lap.   By this time, I had abandoned the idea of lobster entirely and was extolling the virtues of AirBnB via Facebook to my friends back in Oz.

With a late flight out, I had all day to take in Portland and started off with a self-guided architectural walking tour around the Weston Boulevard neighbourhood before heading downtown to check out the Art Gallery.

Portland, Maine is a town full of beards and while apparently not as Hipster (with a capital H) as Portland, Oregon it certainly had a small h hipster feel to it. The Sisters Gourmet Deli, a case in point. Fabulous food with modern (retro) styling.

A different kind of street art

Three more lighthouses, the Bug Lighthouse, the Spring Point Ledge Lighthouse and the Ram Island Ledge Light finished things off nicely before I headed out to the airport for my flight back to New York.

You’ll be pleased to know, I finally got a lobster roll.  A mini one; as part of High Tea at the Plaza Hotel in New York. It was OK but I’m kinda glad it was only mini sized!

Over-rated; lobster, if you ask me…

As it turns out, the “season” re-opens mid-April, so perhaps it would have been better if I had gone a week later when the Park was fully open. But then I would have missed the ice and snow and the beaches which I shared with those squawking, stationary gulls. 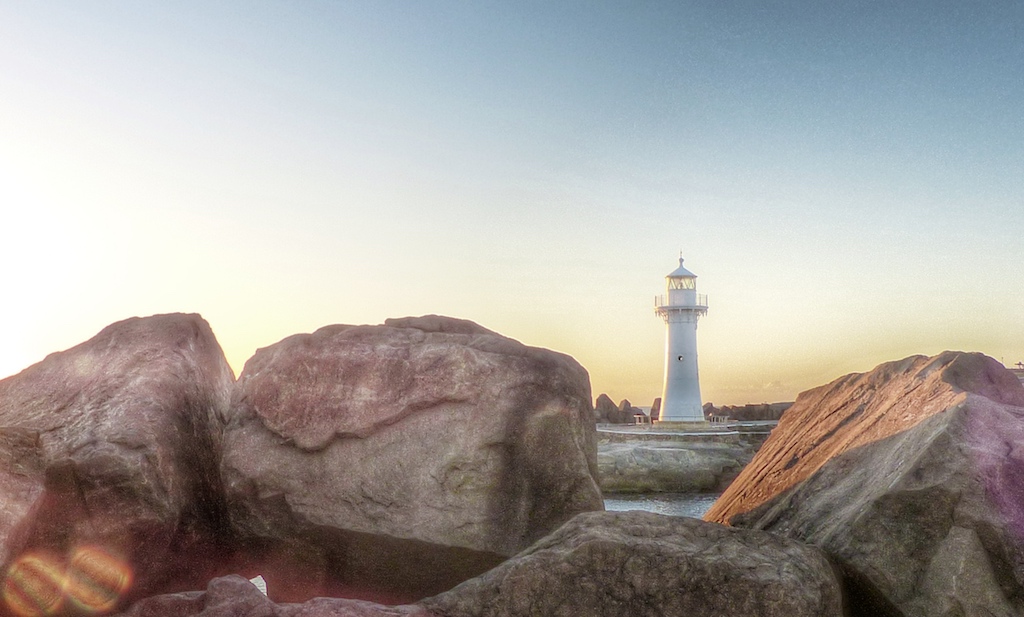 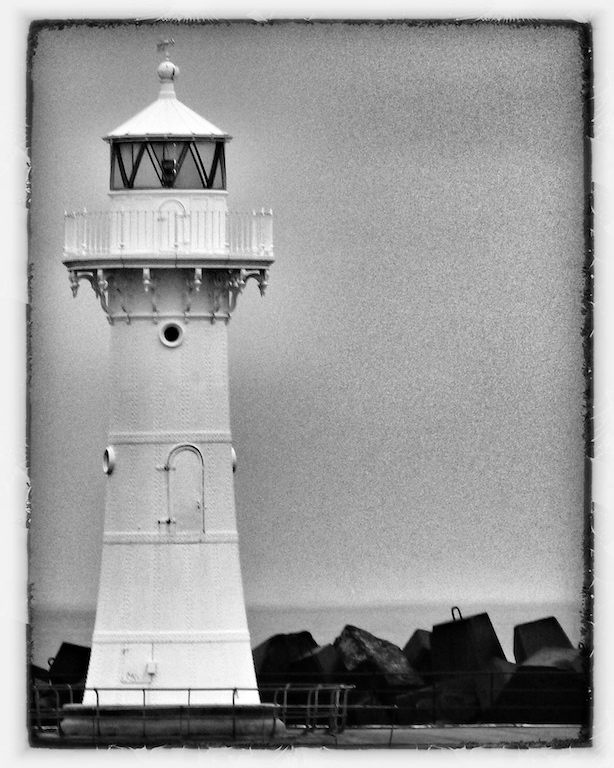 According to Wikipedia, the font of all knowledge, there are 350 lighthouses and lightvessels dotted around the 25,760 km of the Australian coastline. I have been to only a few. One of my bucket list items is to photograph them all. They make lovely photographic subjects, a reminder of man’s battle against the elements set in a majestic ocean landscape.

All the lighthouses in Australia are now automatic. The romantic idea of the lonely lighthouse keeper vanished completely when the Maatsuyker Island Lighthouse on the southern coast of Tasmania was automated in 1996.

My home town has two, known to locals as the Little Lighthouse and the Big Lighthouse, because, well because, one is big and the other one is little.

This photo essay includes some of the lighthouses I have been to. I know I have visited more in my life time, but I have not always taken photos.

I estimate I have more than 300 to visit! I had better get cracking if I am going to tick off that bucket list item!