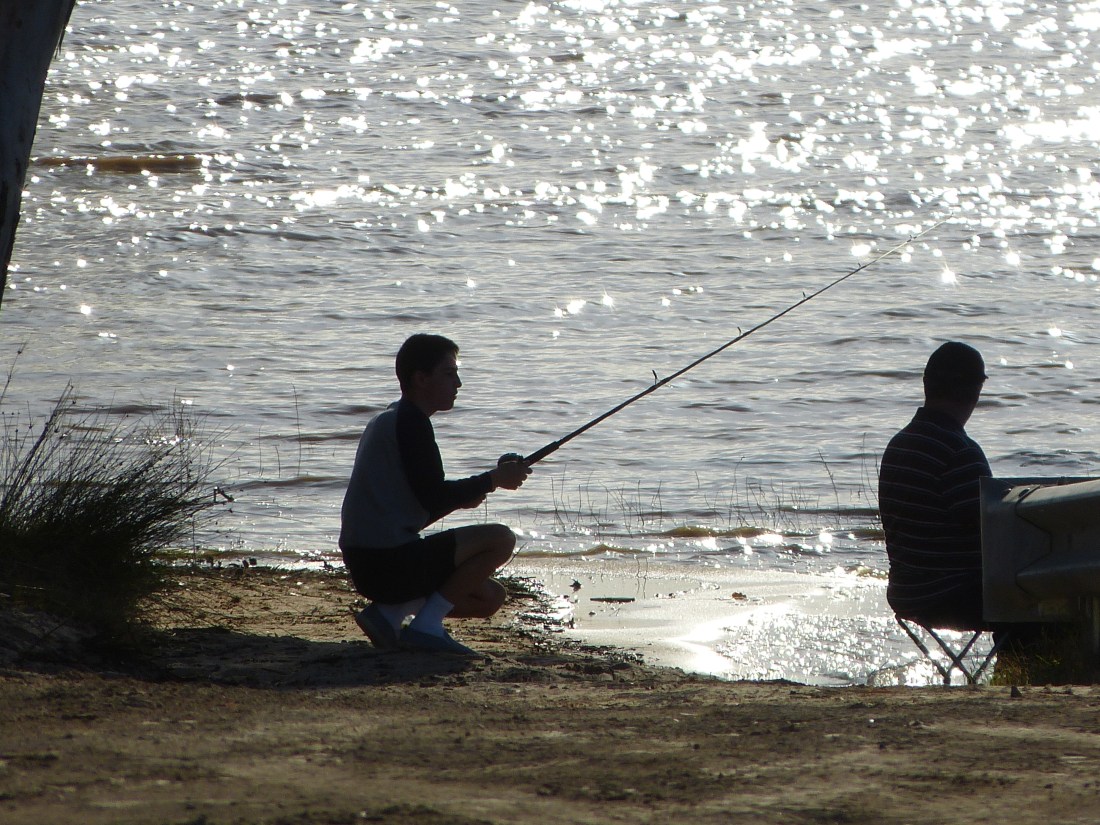 It seems I am very good a starting short fiction but I am not so good at finishing it. That must be why I love the Furious Fiction competition so much. With a short timeline and a 500 word limit it’s very good for someone like me! In the story arena, I’m a sprinter not a marathon runner.

Here is another Chapter 1 of what was originally going to be a longish short story. I remember when I started it in 2018(?) I had quite a complicated multi-pronged story arc in mind which I’ll elaborate on at the end of this post. I don’t want to drop any spoilers here! While Bobby and Dotty are purely fictional characters, their names are a hat-tilt towards my Mum and Dad (Bob and Dorothy.)

I see it as a screen play rather than a piece of prose. I can hear Bobby and Dotty talking in my head as I write.

“Got him!” he said as he flicked the flattened, blood-filled mozzie off his grubby palm and grinned widely.

“OWWWW!” Dotty winced “Got her! You dummy! They’re girls, the ones that bite.”

His grin collapsed. For goodness’ sake couldn’t he do something nice for her just once without it turning into a competition? Just once?

“Come on, Dotty. It’s gunna be dark soon. We better get back before we get carried away by the little buggers.”

They gathered up their things and Bobby threw his satchel under the plank seat as Dorothy pushed the dinghy into the still water.

Bobby poked his tongue out and turned away. He was getting angry. Just because she was three months older and already eleven, didn’t make her the boss. He was faster than her anyway!

Bobby plopped himself down and sat in silence as Dotty pulled the oars through the water steadily even though they were running against the tide. The muscles in her skinny arms, tense. Each time she leaned forward to dip the oars back in the water, he could see down her shirt; her singlet hiding soft puffy lumps.  He looked away. He was pretty sure she didn’t have those lumps at the beginning of summer.

Bobby trailed his hand in the water and thought she had better hurry up otherwise his mum was going to throw his dinner to the dog. That was the rule in his house. If you weren’t home by dinner, sitting at the table, washed up and ready; you went hungry. Even Dad! He was pretty sure at this rate; he was going to be hungry.

Dotty’s mum on the other hand, probably didn’t even have dinner started yet. She would be too busy writing or painting or basket weaving or some other bloody thing. She was very sophisticated. She was an art-teest. She drank I-tie wine. Bobby’s Dad called it plonk.

But Mrs Garland drank lots. She wobbled around the house on pointy-toed high heeled shoes with a glass of red plonk in one hand and a lipstick rimmed smoke in the other. She said it helped her capture her muse. Bobby wasn’t sure what a muse would look like once she caught it, but she certainly seemed pretty keen to grab it.

Bobby liked Mrs Garland, but Dotty didn’t seem to. She said his Mum was the best. That:  he couldn’t understand. His Mum was so strict. So many rules! You could do whatever you liked at Dotty’s. There was no bedtime, no homework time, no chores.  It was perfect!

Mrs Garland’s unfinished paintings, piles of newspaper and lumps of stiff clay wrapped up in once-damp hessian covered every surface. Only Dotty’s bedroom rose above the chaos. She said she liked to keep things neat because it was less confusing.

Clunk, the dinghy hit the bank and Bobby fell off the seat.

“Wake up dreamer!” she said as she flicked an oar-full of water at him. Without answering, he glowered at her and picked up his satchel. A crunchy tinkling sound rang out a warning from within.

“Oh no Dotty! The thermos! It’s broken. Mum will kill me!”

Bobby’s Dad also said girls shouldn’t swear, but Dotty and her Mum both did. All. The. Time.

Bobby removed the blanket-wrapped thermos from his satchel, and while intact on the outside, the inner glass canister was rattling inside the tartan metal tube. Dotty looked into Bobby’s wide, frightened eyes.

“Don’t worry, Bobby. Mum has one exactly the same. She won’t miss it. We’ll duck into my place first and grab it. Your mum will never know.”

By the time they had pulled off the switcheroo, it was nearly dark, well past 6:30 and sure enough as he went up the verandah steps and in through the back door, Rexy was wolfing into lamb chops, thick gravy and potato. Rexy didn’t seem to care they were covered in dust.

“Yep,” Bobby thought as he looked down from the railing “I’m gunna be hungry.”

“Where have you been till this late Robert?”

“Across at the island. Looking for rocks.”

“You and your rocks, Robert. You wasted a perfectly good tea. That dog will get fatter as you get skinnier.”

“Off to bed with you Robert. You need to learn how to tell the time and not be late for tea. I won’t waste my time cooking for the ungrateful. Say goodnight to your father.”

As Bobby walked into the lounge room, his dad Terry looked up from his newspaper. They both rolled their eyes towards the kitchen in a mutual display of mutiny.

“Clare, give the kid some dinner, it’s the holidays for Pete’s sake” he said winking at Bobby

“Terry, rules are rules!” came her voice above the clatter and bang of pots being washed. “I am not a short order cook you know.”

“Not much of a bloody cook at all!” Terry whispered to Bobby as he passed him a buttered white bread sandwich from his pocket. They giggled.

“What did you say Terence?”

“Nothing, dear – just telling Bobby to be on time next time.”

Bobby closed the bedroom door and grabbed his pyjamas from under the crisp white pillow. The smell of Sunlight Soap wafting up from its stiff folds. He loved Monday nights. Tonight, the bed linen would be sleek, cold, and fresh from the clothesline like it was every Monday. As he slipped off his shorts and undies, he heard a quiet tap on the window. Bobby pulled up the blind,

“Ewwww, put some clothes on; will ya! I don’t want to see your willy!” Dotty whispered from the dark.

His willy didn’t used to bother Dorothy. They had spent lots of time splashing naked and muddy in the Clarence in summers’ past, why the fuss now?

“I thought your tea might have gone to the dog. Here. Mum actually cooked tonight.” She passed a bowl through the window.

Bobby grimaced and Dotty laughed “It’s not that bad.”

Bobby sniffed at it again. Mrs Garland didn’t cook often but when she did, she cooked weird wog food. Tonight, wog food was better than no food! He sucked up the strands of spaghetti and the sauce splattered over his checks. It was good; actually. Better than chops. Well maybe not better but different. Better than dusty chops that the dog had mauled anyway.

“Is your dad coming home soon?” Bobby asked between slurps.

Dotty climbed in through the window and sat on the sill. She swung her feet slowly. “He must be. The house was tidy when I went in, and a big pot of spaghetti sauce was on the stove. I guess he’ll be here tomorrow or maybe the next day.”  Her voiced trailed off and she jumped down to sit on the floor. She chewed the end of her plait, squeezing the elastic band between her teeth. Her gaze went nowhere.

Dotty’s family was so exciting compared to the boring rule laden relations he suffered. Terry worked on the river punt.  Every day was the same. Up at five thirty, porridge, tea, walk to the punt. Some days were busy, and some days were slow, but he always got home before six. A minute after six, and Terry’s dinner would end up in the dirt, with Rexy smiling. Fridays were different. Terry was allowed to go the Grafton Pub on Fridays. Two beers and then home with a newspaper parcel of fish and chips under his arm.

Dotty’s dad was in the Merchant Navy. Bobby was not really sure what that meant either, but Hamilton Garland only came home for a couple of weeks each year; one week, every six months. Dotty always got a bit nervous then. This man was a poorly used punctuation mark in her life. Like an unwelcome interrobang; for Dotty he signalled chaos.

Mrs Garland tried really hard not to drink in the days leading up to Hamilton’s arrival. She spruced herself and the house up. She cooked. She packed away the half-finished art. She wore nice clothes and even Bobby could tell she smelt nice. Hamilton was posh. He spoke with a rich refined English accent. He told Dotty to go bathe rather than have a barf.

He would bring gifts. Painted, waxed parasols form Korea; silk kimonos from Japan. Once, a leopard’s skin from deepest, darkest Africa! Dotty didn’t appreciate any of these gifts. They would end up in the bin the day after Hamilton left. Bobby thought she was ungrateful, he never got presents except at Christmas or on his birthday.  He’d love a leopard skin like that! Its allure was not diminished even after Dotty pointed out that the Made in China sticker buried in the fake fur.

On the nights Hamilton was home, Bobby would lean on the windowsill, with his light off, and watch as Dotty’s folks would drink wine and sing. Hamilton would brush the dust off the guitar that had sat in the corner since last time and Mrs Garland would sing like an angel and Dotty would dance.  If Dotty saw him spying, she would pull the blinds, cutting him off from their fun.

Bobby was embarrassed by Dotty’s lack of interest in her Dad. She never said she wished he didn’t come, but Bobby could tell she didn’t like it when he was there. Hamilton would arrive on Tuesday but by Friday, Dotty would be tapping on Bobby’s window.

“Can I sleep here?”  she’d ask her dark eyes filled with even darker fear.

Bobby would sneak her in through the window even though he knew his mum kill him. Sometimes Dotty would cry. Silent tears fell down her screwed-up face and she would hold her belly. She wouldn’t tell him why and Bobby figured that Dotty got sick from the all the spaghetti sauce.

I am hoping I left enough clues for you to pick up that the story is set in Australia, in the early 1960s. In particular it is set in Grafton on the north coast of NSW. The “Clarence” is the Clarence River, one of the largest rivers in Australia. It floods the surrounding areas frequently. Bobby and Dotty are on summer holidays. There are two islands (Susan and Elizabeth Island) in the middle of a bend near the main part of town.

The multi-pronged story arc I eluded to above includes some or all of the following:

Maybe one day I’ll finish it! I initially wanted to make the original bones indigenous and the island a sacred burial ground for the Bundjalung First Nations people. The idea was to have a clash of cultures. But that is not my story to tell and I don’t feel it is right for me to appropriate it.