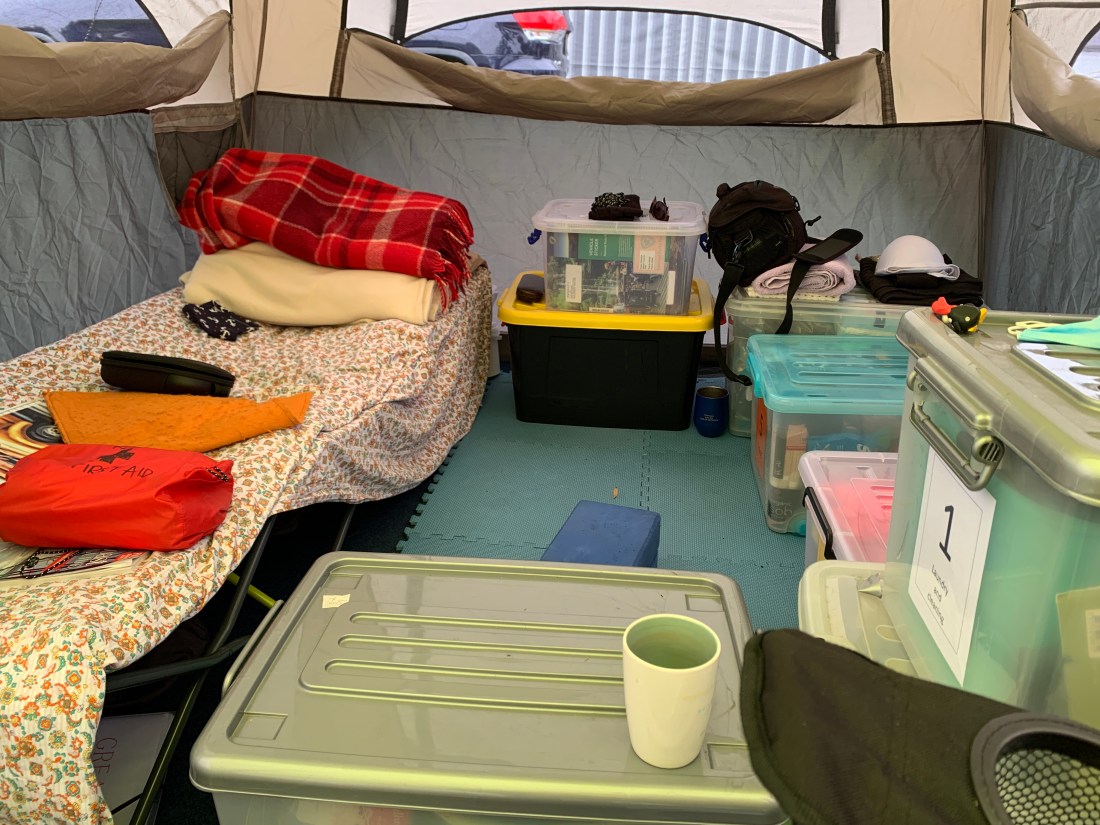 Steady rain is falling on the roof of the tent. It makes a peaceful sound as I sit here typing, surrounded by the plastic storage tubs filled with my camping gear.  I’m dry and I’m content. Big drops turn into even bigger drops on the green roofing fabric. They can only get to a certain size before gravity overcomes surface tension and they slide off. This leads to the need for a MacGyvered dam system to re-route the said water. It seems to be holding, and for the most part, the vestibule area of the tent is staying dry too. Mental note to self:  next time you set up the floor tarp, make sure it does not extend beyond the perimeter of the tent. Let the ground soak up the drops.

I did have a walk planned for today but it can wait. I’ll call this an official rest day, a perfect day to do the washing. A perfect opportunity also to do some writing and get ahead on the bank of blog posts.

A different sort of holiday

This extended holiday is a little different to the last few I have taken. In 2019 I went to Scotland, in 2018 New York and in 2016 – Canada. There were my trips to Israel (6 times), Thailand, the US (twice) Switzerland, the Czech Republic and Vietnam. Ten years ago I had my 50th birthday in France. And even further back, Burma and Italy.

I had always planned to stay in Australia for this trip, nominally a celebration for my 60th birthday. Continuing concerns about COVID and travel bans have meant that my decision back in 2018 was prescient. More recently border closures in Australia have meant even this “local” trip was uncertain.

It’s not only the distance travelled that is different, it’s my attitude. I don’t have to worry about language, or exchange rates or jetlag or keeping track of my passport. There is no chance of Bali Belly. Still it’s more than these logistical things. Unlike these international destinations which I will probably never get to again, there is a chance for me to come back and revisit places I miss on this trip. I don’t have to move like a whirlwind to “make the most” of the air fare. I can take my time, relax a little and not wear myself out. That’s a change.

On the other hand, I am finding it hard to get my “photographer’s eye in” and  to look at things like a traveller. Scenes and vignettes that would catch my eye elsewhere seem ordinary. I need to change that. I need to take on the persona of someone new to this continent.

Here’s a case in point: I remember being wildly excited at Knocken Crag when, after rounding a corner on the hiking trail,  I came within a few metres of a red deer. Luckily I had my camera in hand and managed to get an in-focus shot before it bounded away.

More stories from my Great Southern Road Trip will follow. This is just a warm up. They’ll be prepared on my iPad so the formatting will be a bit dodgy. The SEO will be tackled later!

PS: about an hour after publication, the Premier of Victoria declared a snap 5 day lockdown. I had to quickly pack up my wet tent and get back into NSW. I am not sure now what will become of my road trip! 😕 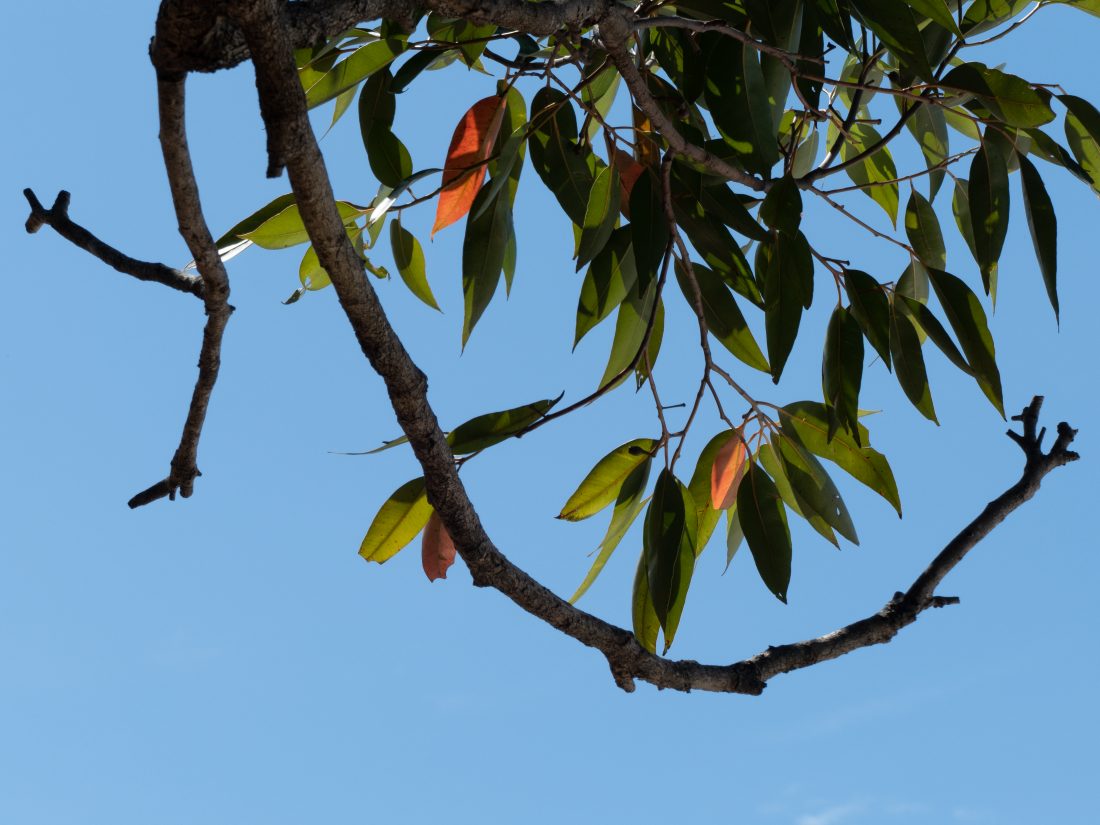 What’s not to love about a great camping adventure?

I love camping adventures! When I was a kid they were the preferred holiday style on my mother’s side. While my own nuclear family had very little in the way of camping gear, we would join the canvas city set up at places like Green Patch for weekends and extended holidays. My happy memories of the camping adventures are strong, but the recall of actual details is low. (Perhaps my Chief Editor will add a comment below to correct my poor recollections?)

My Hundt family camping adventures were the real deal. By that I mean, they were not in fancy caravan parks with amenities but in camp grounds where you needed to look after your own wastes and shower from a canvas bag hung from a tree. Translation: The kids didn’t have a wash other than swimming in the ocean/lake and there was a wee “Wee tent” or a designated latrine area in the bushes. The tents belonged to my Grandma and Papa and other aunts and uncles. There was a communal cooking area and various sleeping tents. The cars were parked Wild-West-Wagon style to set up a perimeter.

Selecting a flat spot, large enough to accommodate the tents, was left up to the camp master, Papa. As a Scout Leader, he knew his stuff. Once the survey was complete, the heavy bundles of neatly folded white and green canvas were hauled out from cars and taken to their assigned spots. Everyone had a part to play in getting them set up. The unfurling was left to the older kids and adults and the delivery of the various wooden tent poles, guy ropes, tent pegs assigned to children of appropriate size. (The photos above are scans of old slides)

Come back at meal time!

The troupe of seven cousins (ranging from 5 – 15) were set free during the day and reported back to camp for lunch and dinner. The rest of the time we played in sandhills, in the water and on the shoreline looking for treasure. I’d like to think there was an adult somewhere watching from a distance but there probably wasn’t! Cousin Susan, at 15 was likely charged with this responsibility. We would get outrageously sunburned. We would be covered in insect bites. We ate a LOT of cheese and spaghetti jaffles cooked over a campfire. But we were safe and happy.

As a teenager, my Aunty Colleen and Uncle Graeme continued the camping adventures but had moved to a more or less permanent camp in Lake Tabourie Caravan and Campground. They’d set up with a group of friends at the beginning of the school holidays and stay put for the duration. People would come and go. My brother and I would go down for a few weeks in the long summer break.

Our activities here were a little more structured although still more or less unsupervised. We had the option of joining in on the Christian Holiday Groups that occupied these places in the ‘70s. They would run activities like craft groups, liberally sprinkled with Scripture of course. There was a shuttle bus that would go into the nearby town of Burrill Lake in the evenings and here we would watch movies in the open-air theatre, sitting in chairs made from a strip of canvas strung on two metal poles. I remember watching all the (original) Planet of the Apes series here.

When I graduated high school, the Ex and I went on a camping adventure to Ballina, with two of our school buddies. (These days this post-school graduation trip is called Schoolies). We told our parents that Trish and I would be sharing one tent and Mark and the Ex would be in the other.  (Yeah right!)   It rained a lot and we spent a lot of time in pubs playing cards. But still, I recall it as a happy time.

As we got older and richer, The Ex morphed into a 5-star hotel man. Ready access to fine food and wine was the priority. Our 1980’s style Wolf-of-Wall Street jobs meant we didn’t go on many holidays anyway. Most of our downtime was spent renovating houses or with my parents who had moved to Bellingen. Sitting on their verandah looking out over cow paddocks was as close as we came to the great outdoors.

The last extended tent camping adventure I had was 14 years ago when I was teaching my daughter how to drive. To get her logbook hours up,  we went on a road trip through western NSW and alternated between camping and rural pubs.

In 2013, I flew to Adelaide and hired a camper van to do a circuit through North-West Victoria, Broken Hill and back to Adelaide. Now, THIS became my favourite holiday – glamping! Accommodation, transport and dining all wrapped up in the one package! The ability to pull over and make a cup of tea wherever you felt like was so appealing! Pulling into the caravan park with nothing to do beyond plugging in the electricity! Bliss!

Such simple healthy pleasures! Camping has been shown to be really good for your physical and mental health. You can read those benefits here in a post by Sports Fitness Advisor, it’s a US site but just as relevant to us here in Aus. Waking up with the dawn light and enjoying the dark night resets your body clock among other things. I am not sure if these benefits extend to glamping! I have not yet tried hardcore camping which requires you to carry EVERYTHING in a backpack to a remote wilderness, but I will soon!

Why this trip down memory lane? I have bought a tent for my upcoming Great Southern Road Trip. My plan is to camp most of the time interspersed with forays into cabins and hotels. My return to camping  is motivated by my memories and as a way of saving some money (see my Year of Zero series). I investigated a camper van but since I’m switching States and doing a walking tour and going to Flinders Island, it would not be economical to have it sitting parked for 12 days. On top of that, it is almost impossible to hire one! With Australians confined to the continent due to ongoing concerns for COVID overseas, EVERYONE is road-tripping!

The tent is EASY to erect. The main support poles are attached and it goes up a bit like an umbrella. It’s big enough to stand in and while nominally a four person tent it will be plenty big enough for me and my gear. I still have to get a few things like a camp bed.

I’ll be doing a practice weekend camp with my grandson in a few weeks in a place not too far from home, to check I have all the gear I need. I have already set it up in my garage to test the “instant-up” claim and yes it is easy, but do you think I can fold it up neatly and get it back into that little bag it came in?? Not easy! 🙂