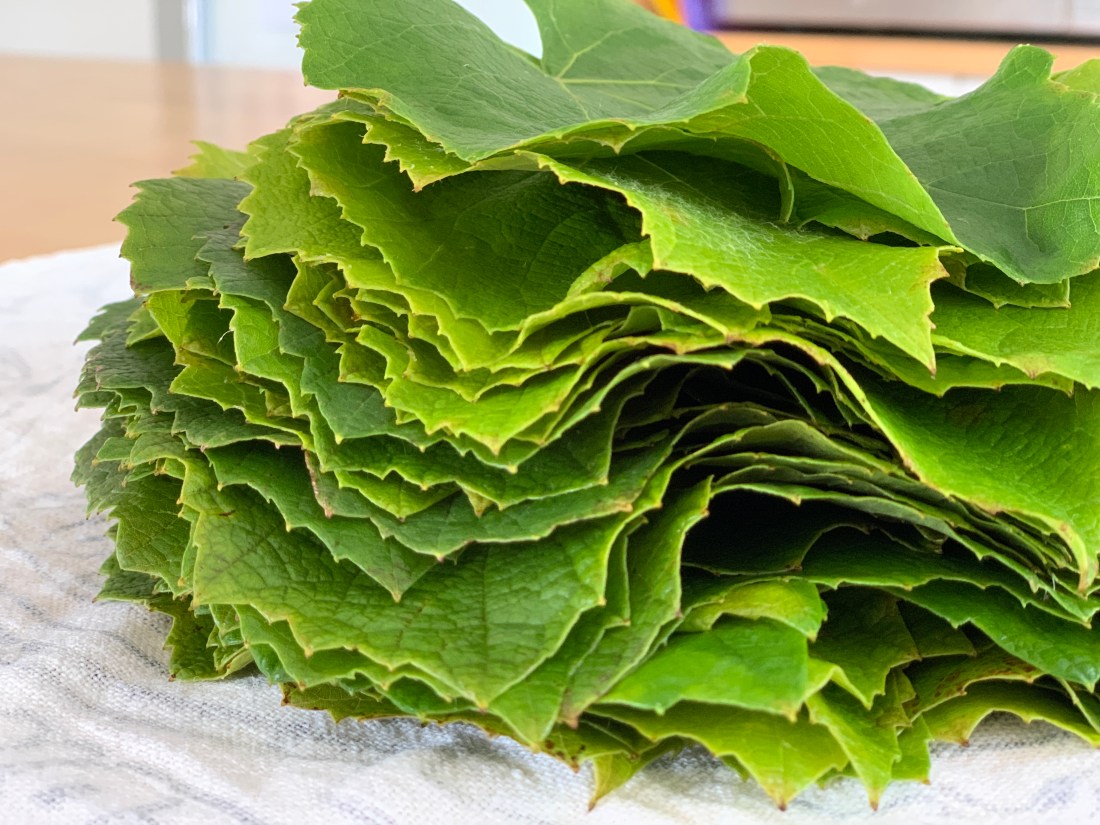 Have you had dolmades? Tasty little packages of lamb mince and rice wrapped up in tender salty vine leaves? Even the canned ones are nice. Fiddly to make at home but worth the effort. Well, so I thought!

Earlier this month I wrote about my love of cooking and humble-bragged about being a half-decent cook. I just got my comeuppance and I have thrown nearly four hours worth of cooking in the green lidded bin (the one destined for council composting).

It all started with the neighbour’s grapevine.

I think the neighbour’s house is an AirBnB or holiday home. From my careful observations, I have determined that it is mostly unoccupied, although sometimes there are groups of people there on the weekends. Someone comes in and cuts the grass every now and then. Again after careful observation, I noticed that the grapevine on my neighbour’s front fence had fat bunches of small red grapes. A-ah, I thought! An opportunity to forage! The neighbours certainly didn’t seem to be using them. The grapes, unfortunately, were well past ripe and riddled with bugs and spider webs. I tried one of the better-looking ones and my face took a full two minutes to unpucker.

Oh well, I lamented, such a waste. I guess if they stay there a bit longer they may well turn into raisins. Then I spied the other forage-able resource. Vine leaves! I can make dolmades. The lawn people just happened to be there and I asked if they thought it would be OK if I picked a few of the leaves. They agreed that the owner wouldn’t even notice.

I did some “research”, that is I looked up a few cooking websites and they said it was easy to use fresh leaves. Just make sure you pick the fresh, young ones. In early summer.  Not too big and make sure they are light green. Otherwise, they warned, the leaves will be too tough and stringy. It’s late summer here but there were a few light green leaves on the vine.  I duly picked 60 of the brightest, softest greenest ones.

Lamb Dolmades without the Lamb

I brought the leaves inside, washed them carefully, checked for bugs and trimmed the stems. I blanched them gently in boiling salted water, for the recommended two minutes. Then I laid them aside while I made the filling.

I have made dolmades several times before with packaged leaves. I’ve used lamb mince and they have always turned out super-tasty. Since I am trying to cut down on my meat consumption, both for my own health and the health of the planet, I decided to make a vegetarian option. I made a rich tomato and rice filling with vegan mince. It had a great consistency and while it certainly lacked the unctuous umami richness I  would get from real meat, it wasn’t that bad. Nothing a bit of salt couldn’t fix.

Next came the wrapping. After some trial and error, I got the wrapping down pat, and soon I had neat rows of little olive green parcels sitting in the leaf-lined baking dish. I popped it in the oven for 40 minutes after splashing it with olive oil and half filling the tray with water as directed.  Once out of the oven, I left them to cool. (Are you adding up the time and labour here??)

In the back of my mind I was thinking that the blanching and baking would tenderise the leaves. I was wrong. While they tasted OK (and here I mean only just OK) the leaves were in fact tough and chewy just like the recipes had warned.  Even after some very diligent mastication, I was left with a wad of green fibres rolling around in my mouth. Ewww. The lack of umami meatiness didn’t help and it was all tragic disaster! (Albeit a first world disaster.)

I decided to let them cool even further and tried them again the next day.  I tried!  I did! I really tried! Extra salt, extra oil, extra lemon juice but nope those leaves stayed tough and stringy and the filling remained pretty darned tasteless.

There was no magical recovery for these time-wasters! I made the brutal decision to bin them immediately rather than let them fester in the back of the fridge for two weeks while I tried to convince myself to be a good citizen and eat them. With the axiom “if food waste were a country” ringing in my ears I tipped them in the bin. 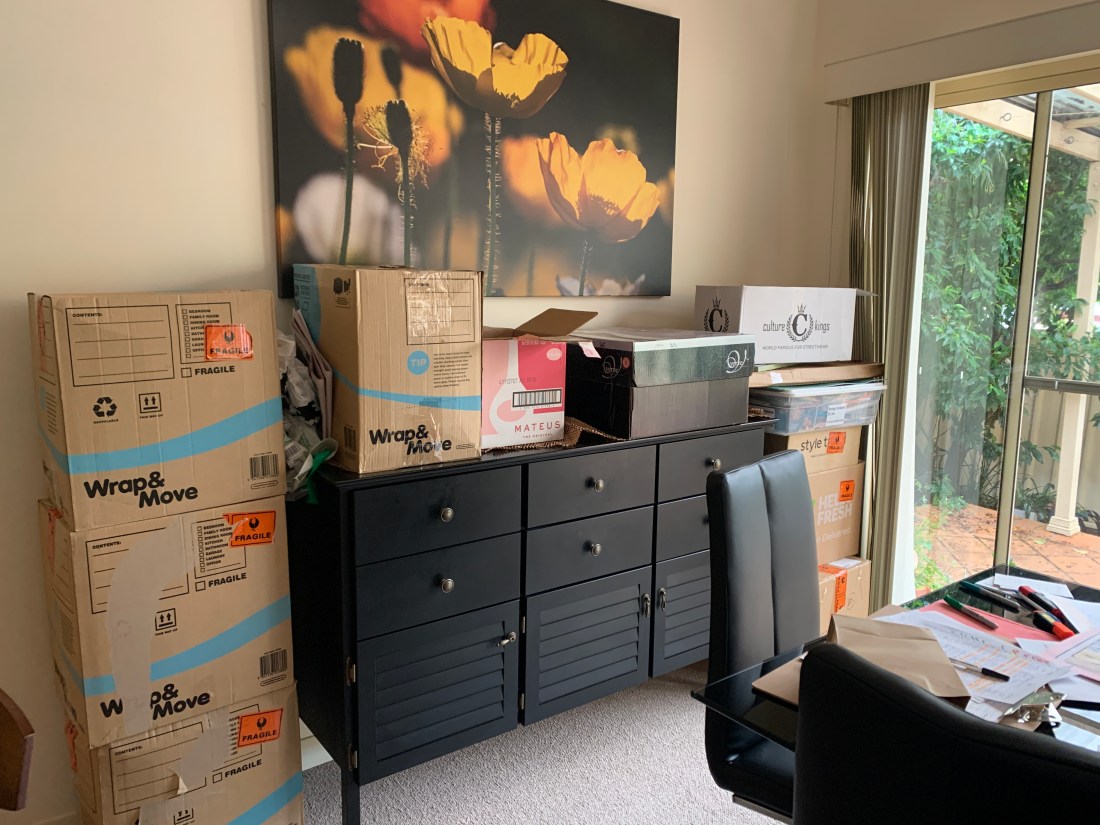 A few weeks (hang on maybe it was months!) ago, I posted that I was moving to Armidale. I have a job and now I have somewhere to live. As I begin to pack up my house, I am overwhelmed by how much stuff I have! The overwhelm is exacerbated by the fact that to get an affordable price for the removalist,  I am sharing a truck with someone else and have a defined space limit.

In the past, I have had the truck to myself and have just chucked everything in boxes. This time, every box I pack represents a fraction of a square metre in a truck I don’t have room for.

How did I get so much stuff? I have been living a relatively frugal life for the past five years. I have had two “buy nothing” years. I have followed a one in one out rule. I bought nothing new. I had rules! Yet, my cupboards are full. Where did it all come from? Does stuff breed behind closed wardrobe doors?

I have the standard three piles happening; keep, donate and throw out. Unfortunately not much is landing in the throw away or donate pile. While none of it, not one skerrick of it is actually junk, (!) there are a lot of memories. I am struggling to cultivate a minimalist attitude al la “The Minimalists” who propose that memories are thoughts and you don’t need to keep the physical object. They suggest you take a photo.  I have written about my attachment to memories through physical objects before. The idea of getting rid of perfectly good items makes me twitch!

I can feel myself getting frustrated because most of the “memories” I have, I use. They serve a dual purpose. They are functional and connect me to my family. I like using my Grandmothers’ vases. I like stirring my cake mix in her bowl with her wooden spoon. I like using the ancient and wonky flour sifter. It’s at least 60 years old, and even though it’s a bit wonky, it still works. However, even I have to admit that I don’t need the pineapple shaped plates I bought a few years ago, regardless of how cute they are!

Ruthlessness is not my strong suit.

Even though I have made some very bold trips to the garbage bin and dropped off a car load at the op shop, the pile of boxes is growing. I have a limit of sixty boxes. I am up to thirty and I still haven’t started with the essential stuff I am still using. I have two weeks to develop a more ruthless approach!

When this most recent bout of COVID lockdown started in the Greater Sydney Area in June 2021, I decided that I was not going to go shopping until I emptied my freezer and pantry. This solved several problems. I was able to avoid the germy world while using up resources that had already been created and thus reduce food waste. I figured I had enough leftovers, frozen veggies and pantry staples that it would not be too much of a challenge.

Step 1 was to do an archeological dig and conduct a freezer audit.  I threw out the UFOs (unidentifiable food objects) that were suffering from freezer burn and no longer edible. The rest of the containers were stacked in neat piles and I retrofitted some labels. Labelling should be mandatory but it is a step that I approach with annoying inconsistency. Present-Robyn has way too much faith in Future-Robyn’s ability to identify the blocks of various curries and casseroles.

Meal planning is one of my happy places and when I cook I generally make 4 – 6 serves. Eat one for dinner, put one in the fridge for tomorrow’s lunch and then the remainder in the freezer for “later”. The trouble is I have a tendency to delay the later. Rather than cook a couple of nights a week, I cook every night, until my freezer is full and I have run out of containers.  There is a direct inverse relationship between my Tupperware cupboard and my freezer. The fuller the freezer (VF = volume of the freezer contents)  the emptier the Tupperware cupboard. (VT)

This propensity for food hoarding has paid off over the lockdown and I have for the most part avoided the germy world of supermarkets. After 6 weeks, I have finally extracted the last of the pre-prepared meals. (Yippee!)

My quest has not been 100% successful as I was forced to seek out some fresh fruit to avoid scurvy (and boredom).  In addition to the fruit, I purchased fresh milk as needed but apart from this, I have made do with what I had. The freezer is not yet completely empty as I still have some frozen pastry sheets some bread and a few other odds and ends, but I can see the bottom. An astonishing feat. I still have a way to go to empty the pantry but that’s OK we’re under stay at home health orders until the 28th August at least.

With an empty freezer, I can start work on the pantry! Hallelujah! Tomorrow, I can cook again!