It was a case of a proverb being lived out in real life. As I stood with the bright hot sun shining on my face, I watched the hay baler wrapping up the cut silage like a spider wraps up a fly. Even from this distance you could hear the black plastic peeling off its spool.

The liquorice log plopped onto the field and the tractor moved on. In the neighbouring paddock, the slasher was busily mowing down the long stalks of green and leaving them in neat trails behind. A mass of seabirds wheeling above catching any insects that were trying to escape the blades of the tractor. A case of out the blade and into the gulls mouth.

I had seen this process back in Australia and in Canada and the US. The only differences here were that the bundles left behind were black rather than pink or green and the birds trailing behind were a different species. I surmised the black was to allow greater absorption of heat and hence faster fermentation of the silage. 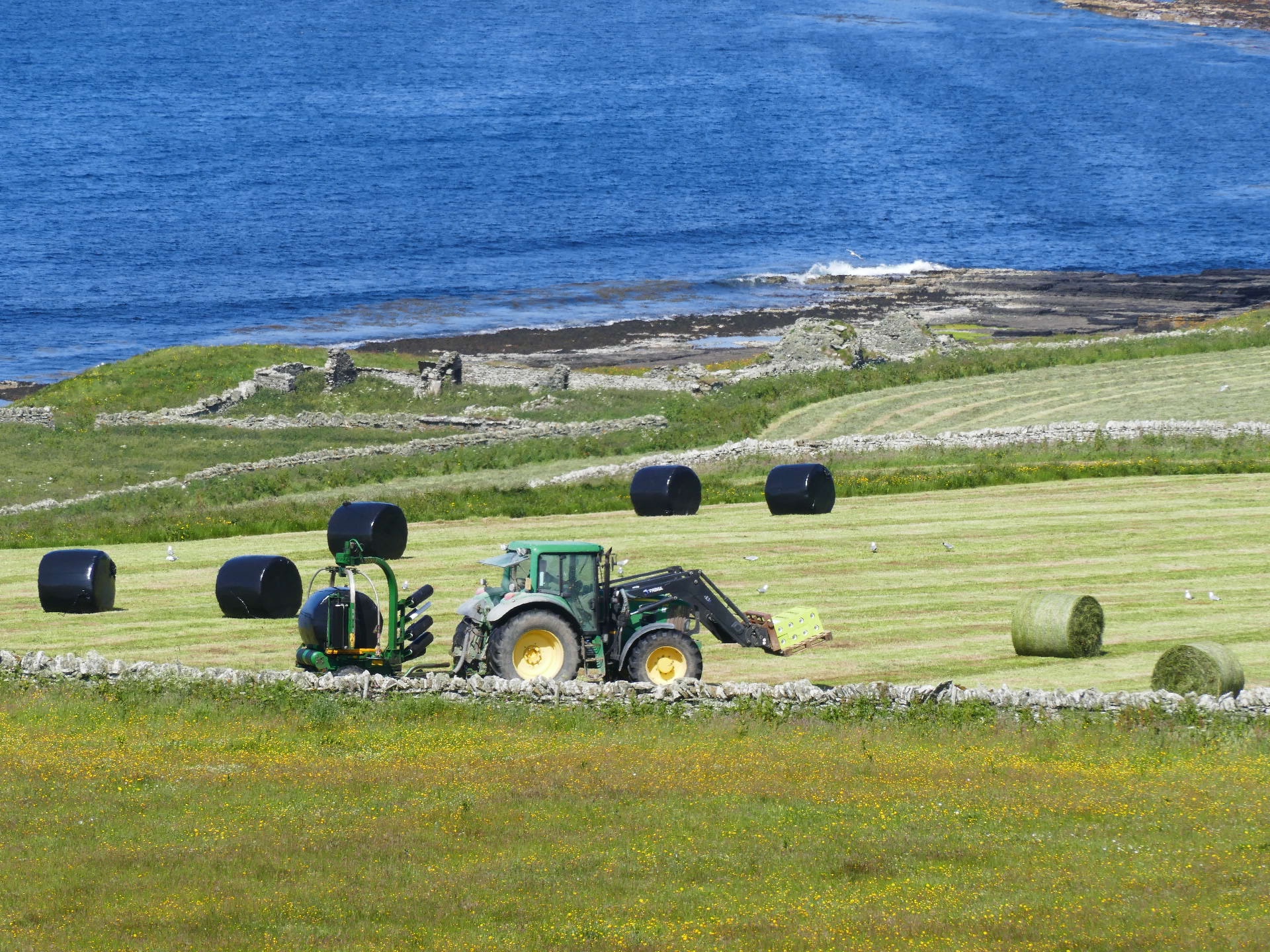 Walking on a little, we moved out of the way of the tractor carrying four bales to the ever growing pile that was up against an enormous stone farm shed. The shed was an impressive structure with a curved roof. Rich farmers I thought to myself. 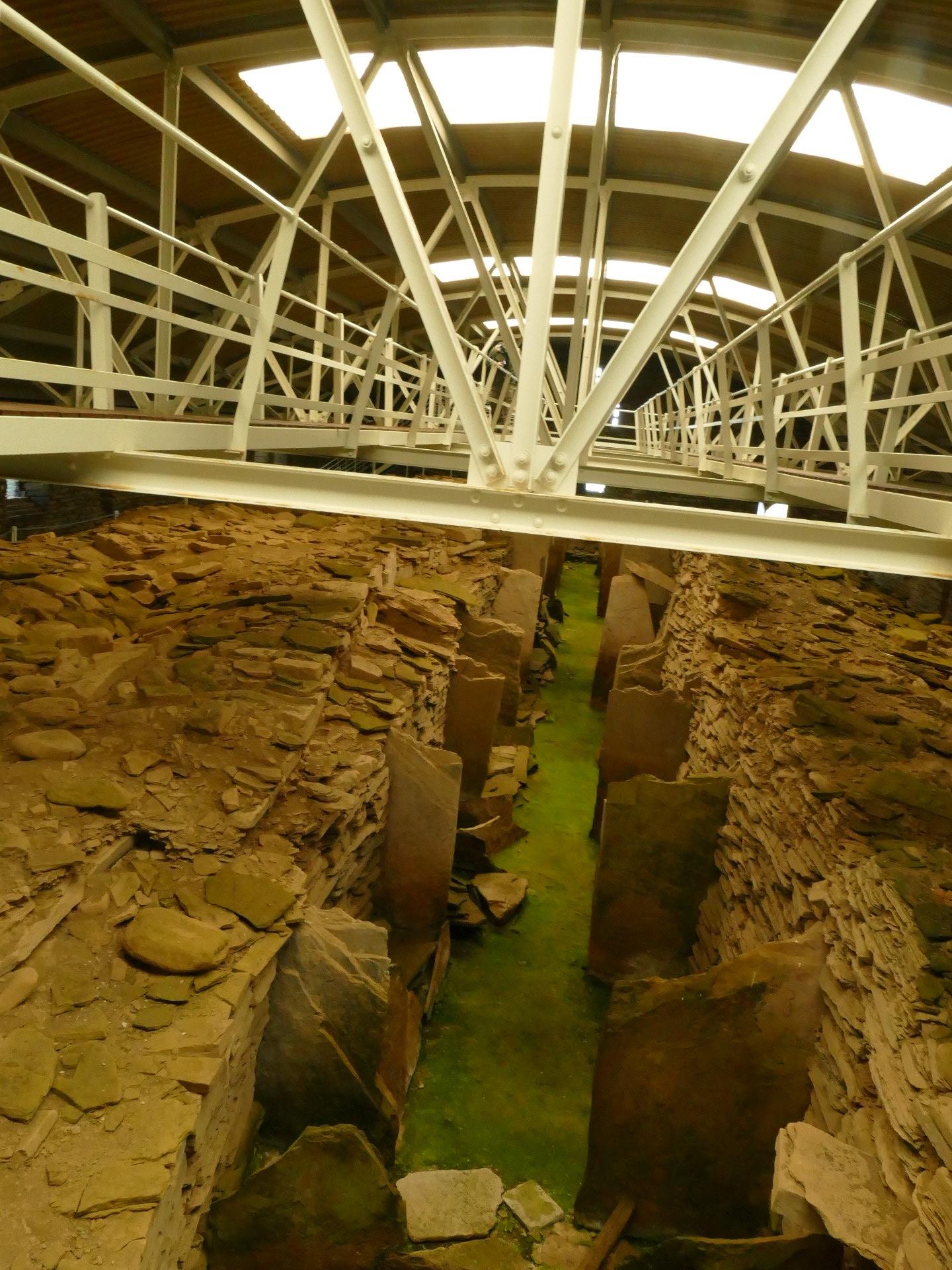 I was surprised when our guide took us into the shed and we discovered it was filled with another stone building. A much older one. The outer more modern building was there to protect the crumbling ruins from the elements.

The Midhowe Chambered Tomb is surrounded by gantries so you can look down into it rather than walk through it. These types of ruins are in as much peril from scrambling humans as they are from the fierce weather. The interpretive sign gives you context and the deduced purpose of the building. A burial chamber with individual stalls and shelving for the bodies. Twenty five skeletons were removed and taken to XYZ Museum. (Research needed! 😃) Your mind can make a good picture of what it may have been like 5,000 odd years ago. 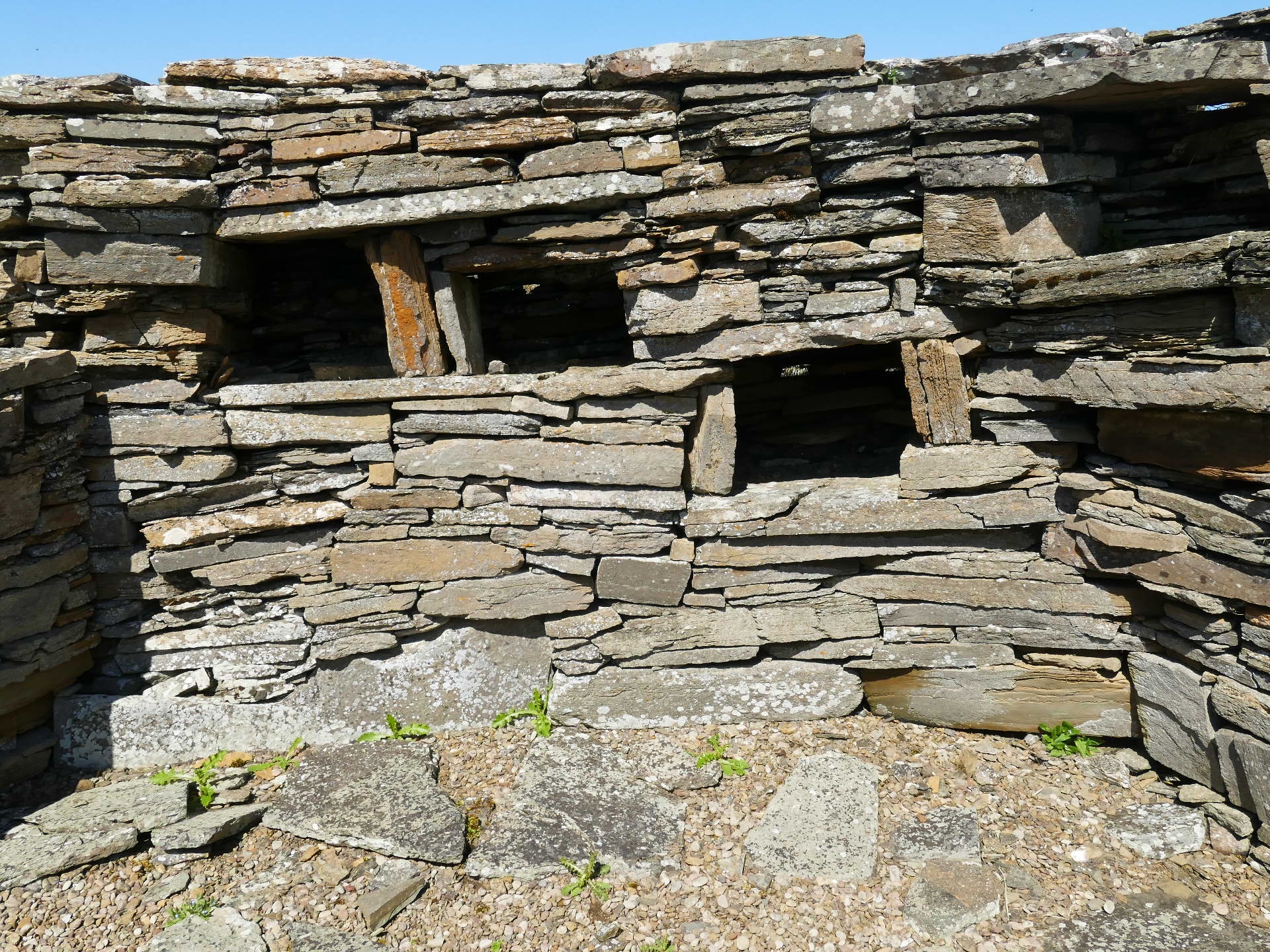 A few more metres along the shore line is a broch – a circular dwelling with rooms, dividers and built in cupboards! The ancient story continues with a Norse dwelling and a very ruined medieval church.

“They say if you kick the ground in Orkney, it bleeds archeology”  our walking guide tells us as we look over the trail of ruins behind us. 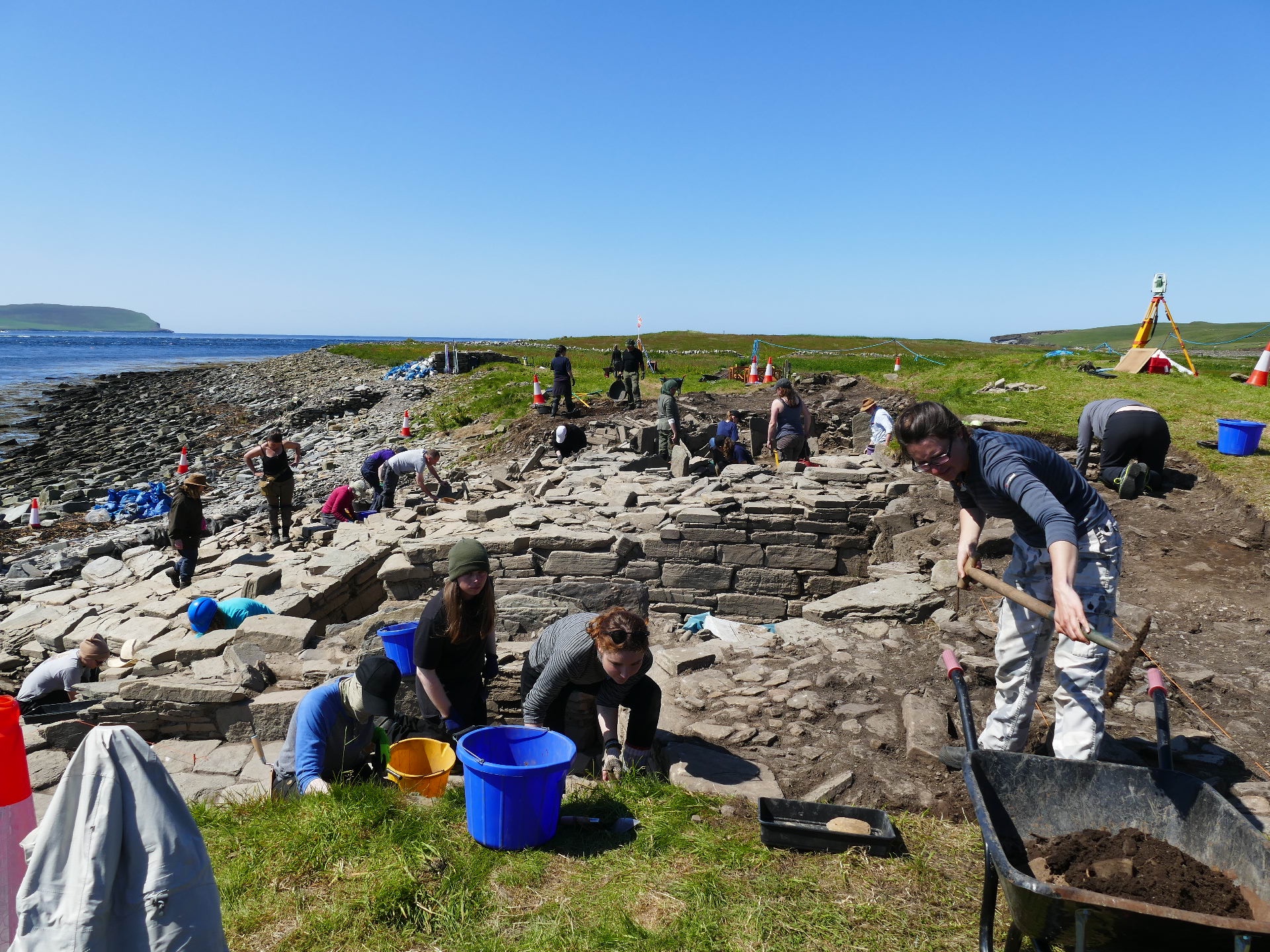 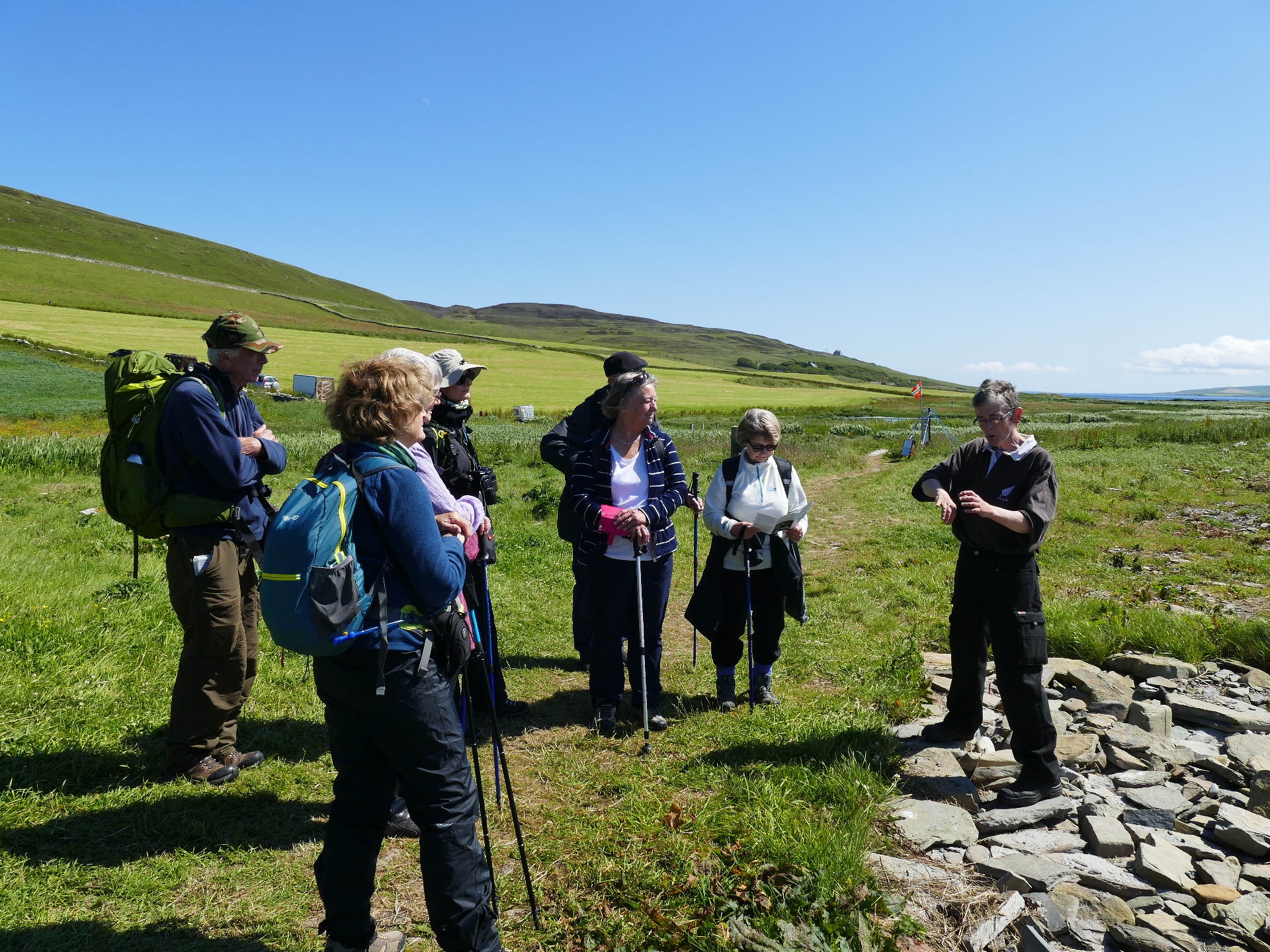 Ahead, are much more modern buildings, the actual farm sheds and the tents of an active archaeological dig at Swandro . The lead archeologist greeted us at a big sign board which showed an aerial view of the dig. She explained to us in detail, what they were doing and what they had found, before taking us to view the shovel wielding, brush dusting students and volunteers who were doing the actual digging. They too were basking in the lovely sunshine and light breeze. This dig is a race against time because it is right on the beach and is being rapidly eroded. The site is of particular significance because of the metallurgical evidence they have found which shows the Smithy was using zinc. This was well ahead of the expected time frame for zinc use in these parts. Her talk ended with a plea for much needed donations to continue their work.

In the afternoon we walked across a patch of typical Scottish moorland with the heather just beginning to bloom. The boggy ground caused a few slips and falls. The descent brought us back to the ferry wharf, a tea house, Orkney Icecream and a much needed toilet! 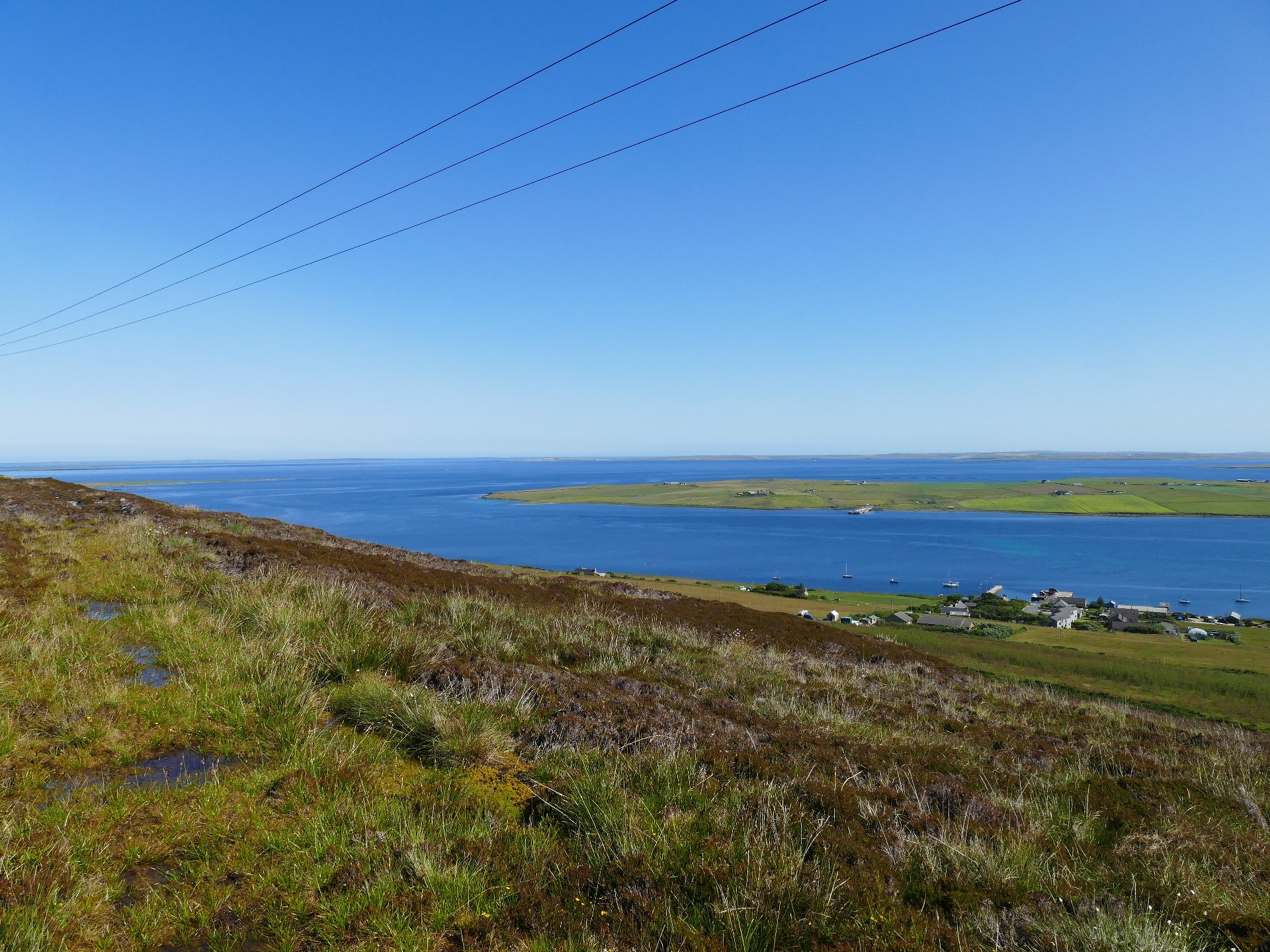 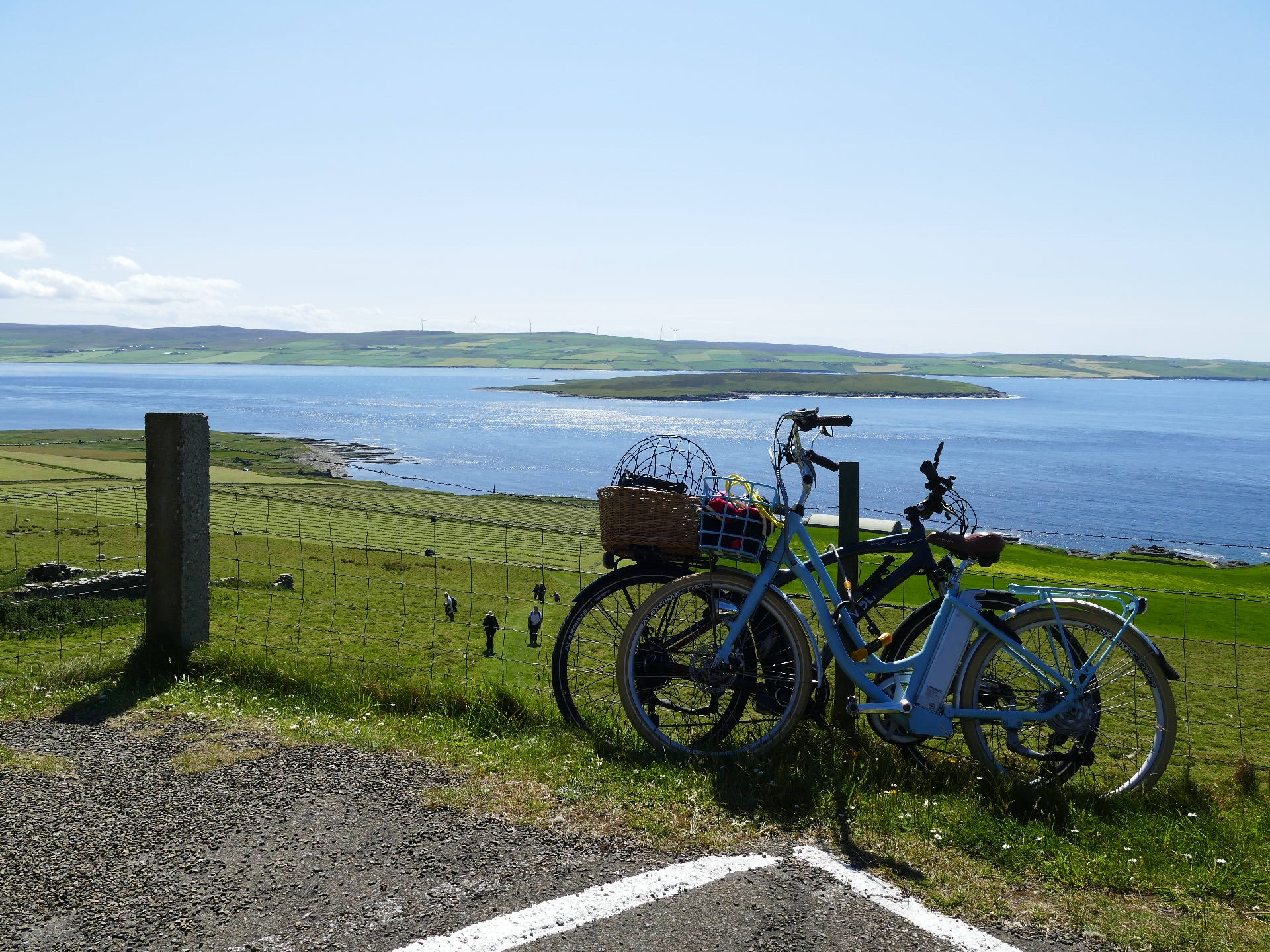 Perhaps because the walk had not been so physically challenging, I decided to push myself by ordering Haggis and Claptrap for dinner at the Ayre Hotel. Claptrap is a mash made from potato and turnip. Haggis, well you know what haggis is. I have a violent aversion to offal but decided to step up to the plate and be a brave old chook! I’m afraid it was a challenge too far. After 3 – 4 mouthfuls the offally flavour became overwhelming and I could go no further. I should be content in the knowledge that at least I gave it a go and it was a one in a lifetime occurrence.

The Claptrap on the other hand? Quite good!