In modern Australian culture and elsewhere, coffee has reached near god-like status. It’s big business and for some, a life force.

According to many t-shirts, it is imbued with amazing properties.

It keeps some people alive: “I can’t function without my morning coffee.”

It can restore lost speech: “No Coffee – No Talkie.”

It can even prevent murder: Coffee helps me maintain my “never killed anyone streak.”

The science of coffee.

To be precise, it’s the caffeine (and other methylxanthines: see the diagram below) present in coffee that does the trick. Caffeine is classed as a heterocyclic nitrogen compound. Its structure is very similar to two of the important building blocks of DNA, adenine and guanine.

It is water soluble, a critical property because if it weren’t soluble, you wouldn’t be able to drink it in the first place!  Caffeine has a melting point of 237°C, another important factor because it doesn’t evaporate away under normal processing conditions. It is an alkaline, white powder when in pure form. Chemically, it’s nothing like cocaine or other stimulants except that it also contains a bunch of carbon atoms joined in a complicated ring shape with a few nitrogens and oxygens and double bonds thrown in.

Caffeine and its biological precursors have been reported in over 160 species of plant. It is found in coffee beans, tea leaves, cocoa, cola nuts, guarana, and plants of the Ilex species such as maté.

Because caffeine is water soluble, the way a coffee beverage is prepared has a significant effect on the amount of caffeine in a cup. It’s all about maximising the solubility. Increasing the temperature of the water, increasing the surface area and making the beans more porous will increase the caffeine content in your daily cup. Hence we roast the coffee beans to make them porous (and tasty) then we grind them to massively increase the surface area before we soak them in hot water. Voila!

The pharmacological effects of caffeine

In plants, caffeine is thought to act as an insect deterrent due to its extreme bitterness. Humans found out about its about stimulating effects a long time ago and have harvested and then cultivated caffeine-rich plants for millennia.

Caffeine does indeed have many well researched pharmacological effects, but most cherished is its ability to perk you up. In 1983 I wrote:

“Caffeine is a stimulant and considered the most widely used of self-administered drugs in the form of coffee, tea and cola beverages. Most people have been exposed to the stimulating effect of these substances and the majority of the population consumes pharmacological doses [~100mg] of the drug at regular intervals throughout the day.”

Caffeine is absorbed rapidly and appears in the blood within 5 minutes of consumption. In most people, it takes about 3.5 hours to clear the blood and be excreted in urine, but in some individuals (like me!) who lack sufficient metabolic enzymes, it can remain active for much longer. Because it is cleared so quickly from the blood, it does not accumulate in the body.

Too much caffeine can lead to headache, tremors, abnormal heart rhythms and irritation of the gut. In addition, we all know about the effect caffeine can have on sleep.  Chronic overconsumption of caffeine results in symptoms that are indistinguishable from anxiety neurosis. It would take about 10 g of pure caffeine to kill you. 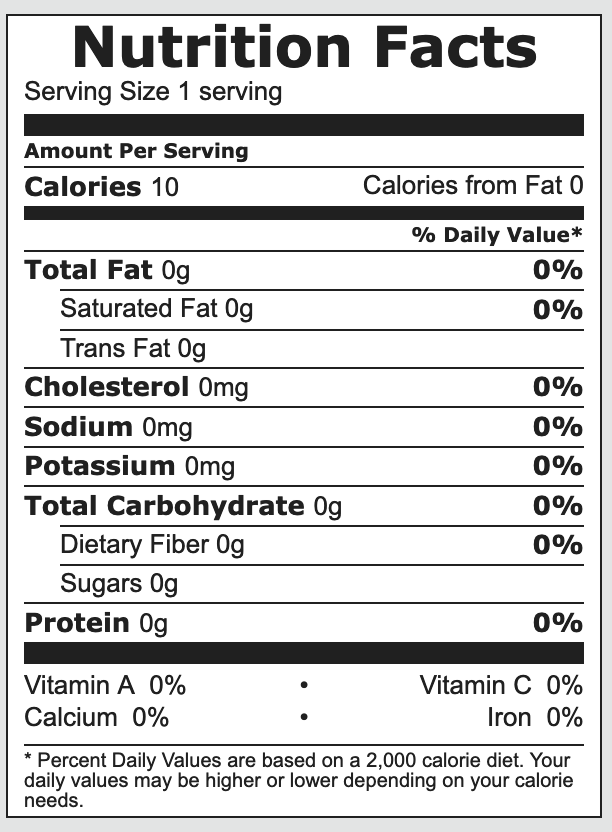 black coffee has no nutritional value. It has no fat, no carbohydrates, no protein, no vitamins and only minuscule traces of magnesium. We have to agree the only reason we drink it is because of the caffeine. BUT who drinks coffee black? Not many people! It’s all the stuff we add to coffee that boosts its nutritional status. The data in the table below is taken from Gloria Jean’s website and is fairly typical of the data available. 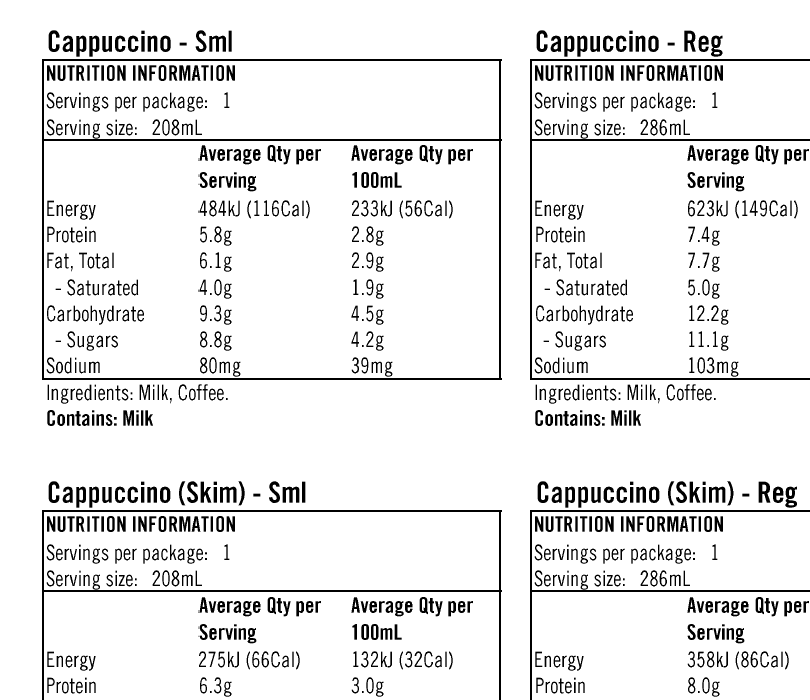 The energy value of a whole milk cappuccino is going to cost you between 484 kJ (116 kcal) – 725 kJ (173 kcal) depending on size. For skim milk, you are looking at about half that. Soy milk is a little higher than skim milk for energy.  The milk is going to provide you with protein, fat, calcium and some lactose. If you add sugar, you can add another 64 kJ (16 kcal) per teaspoon.  A large cappuccino could, therefore, represent a fair proportion of your daily energy intake and must be considered if you are avoiding weight gain.  If you go for something fancy, like a full cream caramel latte, you’re talking around 1000 kJ (220 kcal) or the same amount of energy in 3 eggs! 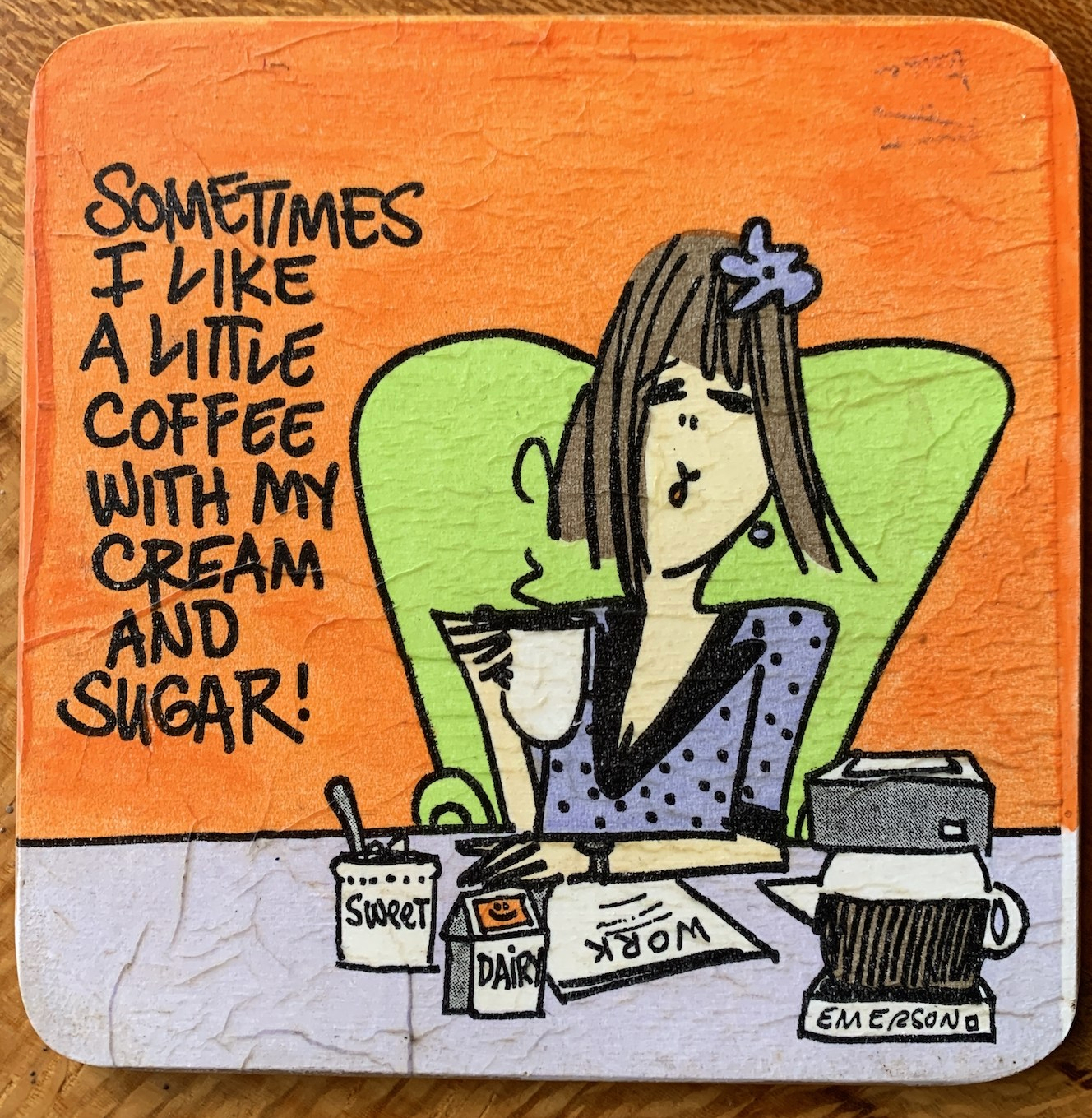 So, is coffee good for you?

My thesis is too old to give me good advice in regards to the overall health effects of caffeine and coffee.  So a search of the interwebs turns up some interesting information.

The European Food Safety Authority (EFSA) in a review on the Safety of Caffeine concluded that moderate caffeine consumption, of around 400mg caffeine per day (the equivalent of up to 5 cups of coffee), can be enjoyed as part of a healthy balanced diet and an active lifestyle. Pregnant and breastfeeding women are advised to limit their caffeine intake to 200mg per day.

It even goes so far as to say that caffeine consumption is associated with a reduced rate of mortality. Is this from the coffee itself or from the social aspect of coffee? That’s a whole other kettle of fish. Once again however we are talking about caffeine not the coffee beverage of choice. Sure, caffeine might have no ill effects, but if you pile in the sugar and cream, that’s a different story entirely!

In my own case, if I have more than one cappuccino a day, I end up with a belly full of gas. I know from anecdotal experience I am not the only one who suffers this consequence. As stated above, caffeine stimulates the production of gastric juices which speeds up digestion, milk contains lactose which challenges many adults at the best of times and with the relaxation of smooth muscle, which incidentally is the type of muscle in your intestines… well … well, you know how it’s going to end!

I guess you need to consider whether your personal circumstances can cope with the increased energy consumption of milk based coffee beverages. If it can’t, you might want to consider black coffee or even a splash of milk in a cup of International Roast!

Next week: Is coffee sending the world broke?

One thought on “Coffee and your waistline.”